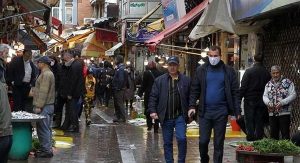 · Deputy Governor of West Azerbaijan: Until the beginning of June, the death toll was less than six people a day, but yesterday the death toll in the Province passed 19. Danger is lurking for everyone

· Deputy Health Minister: There are no stable epidemic conditions in any of the provinces … We will face more severe crises in the cold season

· Loghman Hospital in Tehran: We are facing a new outbreak of the disease. We do our best. But the results are not so great, and we are witnessing loss of lives.

· Mrs. Maryam Rajavi hailed the protesting nurses who were attacked with batons and Tasers in Mashhad, as well as the general practitioners, nurses and all medical staff who are striving their best to save the lives of patients. She added: By plundering and squandering the public wealth and resources on nuclear and missile projects, along with terrorism and warmongering, the clerical regime has destroyed the country’s infrastructure. Despite the most skilled and selfless doctors and nurses, it has left our people defenseless in the face of the disease. The only way to end this situation is to overthrow the clerical regime and establish democracy and popular sovereignty.

According to the state News Network, the spokesperson for the regime’s Health Ministry said today that the number of Coronavirus deaths during the past 24 hours was 154, and the number of new infections 2,566, out of whom 1,483, i.e., 58%, had been hospitalized. She also said that 3,123 patients were in ICU, the highest number in recent months. She described the situation of Khuzestan, Khorasan Razavi, Kurdistan, Kermanshah, Hormozgan, Bushehr and Ilam provinces as red, and the situation of Tehran, Fars, Hamadan, Sistan and Baluchestan, and Alborz provinces as alarming

The regime’s Deputy Health Minister was quoted by the state news agency, Tasnim, today as saying, “There is no stable epidemic situation in any province of the country… If we fail to control the virus in this period, we shall face more serious crises during cold winters.”

Minoo Mohraz, a member of the National Coronavirus Combat Taskforce (NCCT), told ISNA today, “The hospitals are crowded again, and the wards and beds assigned to Coronavirus patients are occupied… the medical staff has been tired during past months, and the disease has intensified again, causing them extreme exhaustion. The educated and experienced staff cannot be easily replaced either.”

Dr. Alavi, the expert in infectious diseases in Loghman Hospital in Tehran, told ISNA news agency today, “We are facing a new outbreak of the disease and an increasing trend of infections…The patients need ICU to the extent that almost every day, we add a new section to the ICU section… We are doing our best for the patients under special care… However, medical efforts prove to have little effect on these individuals, and we are, unfortunately, seeing more deaths.”

In Bushehr, the secretary for the NCCT said: “Given the Coronavirus spread, we are facing a lack of nurses and general fatigue among them. Several of our physicians have contracted the virus and are currently quarantined. The number of incoming patients is higher than those being discharged. If this trend continues for several days, we will certainly have zero hospital capacity soon,” reported the ISNA news agency on July 2.

In Kerman, “Almost the entire Province, the country’s largest, is under full alert.” The head of Sirjan’s Faculty of Medical Sciences told the state-run daily, Hamshahri, yesterday, “The increase in work-load and fatigue on the part of colleagues, physicians, and nurses, because of the increased infection spread has led to degrading quality of medical care which has, in turn, contributed to the personnel’s infection and loss of system efficiency.”

In Fars, the vice-president for Shiraz University’s Medical Sciences told ILNA news agency, today, “The capacity of four hospitals devoted to Coronavirus patients is nearing its end, and with the current trend these hospitals would no longer be able to accept COVID-19 patients. We might possibly be obliged to use Beheshti hospital and other private hospitals for Coronavirus infected patients.”

According to state-run news agency Mehr, the deputy governor of Western Azerbaijan Province said, today, “Western Azerbaijan is red. Until a month ago, the number of the dead was below six people per day, but the figure started to mount daily, reaching 19 yesterday. The danger is real and present everywhere.”

In Hormozgan, the president of the Medical Sciences University told Fars news agency yesterday, “10 more deaths were added to the Coronavirus fatalities on Thursday…. Currently, 531 COVID-19 patients are hospitalized in the Province; 81 are in ICU, with 31 in critical condition.”

In Khorasan Razavi, ISNA quoted Kashmar governor as saying today, “Relative to the past two weeks, the number of those hospitalized in Moddares Hospital has risen 14-fold.”

While physicians, nurses, emergency personnel, and Ambulance drivers face the risk of being infected, and some have died, they are facing enormous work pressure. But the clerical regime does not pay anything to improve their situation and has delayed paying their overtime pay and salaries. Currently, there are many ready-to-work nurses, who would provide a boost to an exhausted and worn out treatment system. But the regime refuses to hire them and only signs 89-day contracts with them so that they would be ineligible for insurance and unemployment benefits. Nurses in Mashhad staged a protest gathering against extreme pressures, terrible living conditions, and the non-payment of their wages. But the State Security Force attacked them with batons and Tasers and arrested several of them.

Mrs. Maryam Rajavi, the President-elect of the National Council of Resistance of Iran (NCRI), hailed the protesting nurses who were attacked with batons and Tasers in Mashhad. She also praised all physicians, nurses, and medical personnel who risk their own lives and those of their family members to save the lives of those ill. She said four decades of plundering and squandering the Iranian people’s wealth on the unpatriotic nuclear and missile programs, as well as terrorism and warmongering had destroyed the country’s infrastructure. Despite the presence of the most skilled and selfless physicians and nurses, the regime has left our people defenseless in combating this virus. The only way to end poverty, corruption, unemployment, and disease is the overthrow of the clerical regime and the establishment of democracy and people’s sovereignty.