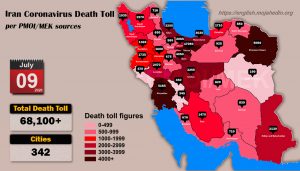 According to the state news agency, IRNA, today, the spokesperson for the regime’s Health Ministry announced the number of Coronavirus deaths in the past 24 hours with a historic jump to 221. She put the number of patients under special care at 3,324, which is unprecedented since the onset of the Coronavirus outbreak last winter.

Rouhani cruelly called the wave of victims “the failure to take the restrictions and instructions seriously by people, particularly in friendly gatherings and unions such as weddings and mourning.” However, Rouhani’s outrageous comments cannot overshadow the truth, as the growing number of victims has fueled its fear of uprising and infighting between the regime’s factions.

Namaki, the regime’s Health Minister, told IRNA yesterday, “We only received less than 30 percent” of the $1 billion that Khamenei had specified… “Why should I, as Minister of Health, have a soft tone in the face of a high-ranking authority? Due to using some unprofessional remarks… I didn’t show up in front of the camera for a long time, because I was both angry and heartbroken … Instead of saying don’t worry, leave the economy to us and deal with the disease, the Minister of Health, who should only focus on health issues, had to pay more attention to economy as opposed to public health. He had to tell staff to write protocols on how to reopen, instead of on how to lockdown and impose limitations. We read the security reports. It is a serious issue that people are reaching a point of eruption from poverty. The president and the security forces must think about (people’s) livelihoods to prevent an eruption.” He threatened, “I have a Coronavirus diary, and it will be published if my life allows,” and “If my dear colleagues’ endeavors are undermined in any way, I will be forced to say things that could well be beyond tolerance…”

The director of the Infectious Diseases Department at Birjand University of Medical Sciences was quoted by Javan daily yesterday as saying: “The actual Coronavirus statistics may be ten times higher than the official figures … If the number of infected people is announced to be 2,600, the actual number maybe 20,000, and perhaps the number of deaths would be 400.”

In Tehran, Alireza Zali told the state-run Shabakeh Khabar TV, July 8, “So far 4,400 health and medical personnel at universities have been infected… The distributed financial incentive packages have been seriously reduced due to difficulty in payment of the subsidies and personal incomes… A hidden discontent because of the non-payment of financial incentives exists… Because of a strategic error, Tehran was never declared red… Work in Tehran must be suspended for a full week… If this does not suffice, we must impose a lockdown in Tehran.”

The state-run Khabar Fori website wrote today, “Coronavirus is a time bomb in Tehran which will explode soon… The situation is getting worse in the capital by the day. The head of Khomeini hospital complex said the more worrying issue is that the number of patients in need of hospitalization in ICU is more than normal patients, comprising some 40 percent. Also, the number of patients using ventilators has increased.”

In Khorasan Razavi, a member of the city council in Mashhad was quoted by IRNA as saying today, “In the second wave of Coronavirus, all records were broken… The rise in fatalities in the city has sounded the alarm bell.” Tasnim news agency wrote on July 9, “The situation is Khorasan Razavi and Mashhad continues to be critical (red), and nothing seems to be done to confront this situation… According to the announcement by the Province’s Coronavirus Task Force, the situation in 17 cities throughout the Province is red.”

In Qom, the president of the Medical Sciences University told IRGC’s mouthpiece Javan yesterday, “All hospitals and health and medical Staff of Qom are on full alert… In addition to Kamkar Hospital, we have again prepared Forqani Hospital to receive Coronavirus patients.”

In West Azerbaijan, the president of the Medical Sciences University told Mehr news agency yesterday, “Currently, Taleqani and Khomeini hospitals in Urmia are full, and a third hospital is allotted to treat those infected with the virus. In other cities in the Province, hospital beds are reaching full capacity, and this trend is a cause for concern.”

In Golestan, the president of the University of Medical Sciences told Mehr news agency, today, “The number of red cities in Golestan Province has increased to 12 and only two cities, Aliabad-e-Katul and Maraveh Tappeh, are in a state of warning … At some point in time, the number of Coronavirus patients hospitalized had reached 150, but today it is more than 700.”

In Mazandaran, the president of the University of Medical Sciences told ISNA, today, “The cities of Amol, Babol, Behshahr, Ramsar, Mahmoudabad, Savadkuh and Nowshahr are red … The Coronavirus outbreak is rising rapidly, and if we do not control this situation, we will be forced to move in the direction of quarantine, re-imposing restrictions, and locking down activity centers.”