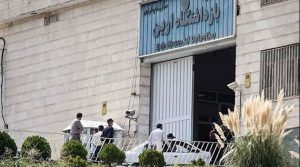 The Iranian regime’s Ministry of Intelligence and Security (MOIS) and the Judiciary have begun to arrest and issue prison sentences for the supporters and families of the People’s Mojahedin Organization of Iran (PMOI/MEK) and those who have signed the statement of incarcerated and released prisoners.

The desperate effort comes after the failure of the anti-MEK slanders and a fake petition signed by 8,000 so-called families of the MEK members and on the eve of the Iranian Resistance’s Free Iran Global Summit in solidarity with the Iranian people’s uprising.

Zahra Akbari, the wife of political prisoner Abolghasem Fooladvand, Dr. Hani Yazarlou, and his son, Hood, Ms. Sedigheh Moradi, Mehdi Khawas Sefat, and Mohammad Wali Gholamnejad are among those who received prison sentences. They had been arrested last year and released.

Now, however, they have again been sentenced to prison. Dr. Hani Yazarlu was among the political prisoners in the 1980s. Mohammad Wali Gholamnejad had been imprisoned from 2008 to 2011.

Ms. Farangis Mazloom is also reported to have been sentenced to six years in prison but has not been officially notified yet. She was imprisoned for three months last year on the charge of acting against the ruling regime and underwent heart surgery.

On June 28, 2020, the Security and CounterTerrorism Committee of the National Council of Resistance of Iran issued a statement in which announced that following the publication of a statement by political prisoners exposing a clerical regime’s intelligence agent, several signatories of the statement and their families had been pressured, harassed and intimidated. The goal was to break the prisoners and force them to express remorse and denounce the MEK and the Iranian resistance.

Reacting to the new wave of arrests of MEK’s supporters and families, Mrs. Maryam Rajavi, the President-elect of the National Council of Resistance of Iran (NCRI), called on the United Nations Secretary-General and the High Commissioner for Human Rights to send an international delegation to visit the regime’s prisons and meet with prisoners and their families.