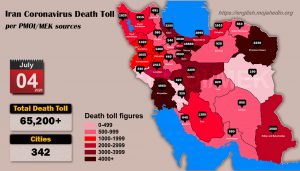 The spokesperson for the regime’s Health Ministry put the death toll for Coronavirus during the past 24 hours at 148. Speaking to IRNA news agency, today, she said, “The Provinces of Khuzestan, Western and Eastern Azerbaijan, Kurdistan, Kermanshah, Hormozgan, Bushehr, Khorasan Razavi and Ilam are all red. Also, the provinces of Tehran, Fars, Isfahan, Mazandaran, Hamedan, Zanjan, Sistan and Baluchestan, Alborz and Lorestan are in a state of alert.” (IRNA news agency, July 4)

While local authorities in different provinces report a severe shortage of medical services and the health care system’s disintegration, the mullahs’ president Hassan Rouhani brazenly said today, “Our health and hygiene system was so active that we barely needed to ask our armed forces to help out. During this period, our health and hygiene system works and, at the same time, increases its capacity in hospitals and hospitalization… During this period of five to six months in which we are facing this virus, 1,500 specialized beds have been added to our health system. As we proceed, more beds, ventilators, ICU units, and other means such as medicine are added, and every month two lines of medicine production will be added on average.”

Referring to the epidemiological goals of serology tests, Masoud Mardani, member of the NCCT, told ISNA today, “This test was performed randomly, and we found that 18 million Iranians, or about 20 percent of the country’s population, have been infected with the disease so far.”

The state-run daily, Hamshahri wrote yesterday, “A study of the statistics of the Health Ministry shows that in the last ten days (June 24 to July 3), on average, 106 people have been infected in Iran and approximately six people lost their lives to this virus every hour.”

According to Javan daily, the president of the University of Medical Sciences in West Azerbaijan said yesterday, “In the past 24 hours, five people have died in Mahabad, 188 people were hospitalized with symptoms of the acute respiratory syndrome, of whom 10 lost their lives… If this process continues, the situation will get much worse.”

In Ilam, the regime’s official news agency reported today, “Only in the past 11 days, the number of infected has doubled, the death toll has increased exponentially. According to the governor, 90% of the Province’s population are in the Coronavirus red zone, and in total, 11 cities are red.”

In Khuzestan, eyewitnesses report that on Friday, July 3 alone, ten people died of Coronavirus in the Padadshahr district, and 15 in the Zeytoun district of Ahvaz. Ahvaz Razi Hospital is full of Coronavirus patients and has no capacity for new patients. The president of Ahvaz University of Medical Sciences was quoted by Tasnim news agency, as saying, “The red cities of the Province have increased from 9 to 12 cities.”

In Qom, according to eyewitnesses, only on Friday, July 3, five people died of Coronavirus, on Sadough Avenue.

In Fars, the president of the Medical Sciences University in the city of Larestan told IRNA yesterday, “The disease is spreading rapidly in the cities of Larestan, Khonj, and Evaz. In addition to hospital beds becoming full in Larestan, in the cities of Khonj, Evaz and Biram county hospitals are reaching capacity… In Larestan, we were forced to add the children’s ward to the Coronavirus patients.”

In Kohgiluyeh and Boyer Ahmad, the vice-president of Yasuj Medical Sciences University was quoted by IRNA as saying today, “Considering the uptick in the number of patients and the rising number of hospitalizations in Kohgiluyeh and Boyer Ahmad, especially in Gachsaran, difficult few weeks in July and August lie ahead for the people in the Province.”

In Kermanshah, the governor told ISNA yesterday, “12 cities in the Province are red and this is concerning.”

In Zanjan, the vice-president of Medical Sciences University said, “Eighty-five percent of the population in the Province are susceptible to infection. The number of hospitalizations has risen substantially. The continuation of this trend is an alarm bell for the Province,” according to IRNA, on July 4.

In Kurdistan, the deputy governor told Mehr new agency today, “Considering the situation of Sanandaj, Qorveh, Marivan, and Bijar which are in a state of red, restrictions have been imposed throughout Kurdistan.”

At the same time, Hamdeli daily wrote today, “While the number of those infected with COVID-19 every day and the number of those who have died relative to the early days has not decreased, the Government cannot do anything else other than a few recommendations, making wearing masks at work mandatory, or delegating authority to governorates.”

An hour ago, the state TV announced the return of the Coronavirus restrictions in public places starting on Sunday, July 5. While reporting on this, it noted that the situation has passed alarming.

The Jahan-e-Sanat daily was shut down after quoting Dr. Mahboubfar, a member of the National Coronavirus Combat Taskforce (NCCT), as saying that the...
Read more
Statements