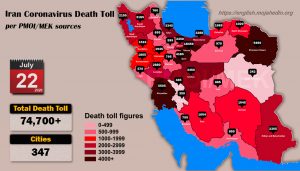 Lack of funding, lack of medical equipment and facilities, and depletion of medical staff have exacerbated the Coronavirus disaster

Regime MP from Gonbad Kavus: It seems that they (regime) have a pledge to kill all the people

· Ministry of Health: The number of cities on alert has increased by 40%. In Mazandaran, the daily hospitalization rate has tripled

· Regime parliament’s deputy from Gonbad Kavus: The officials have learned to blame everything on the people. For how long should people die while waiting in line for an empty ICU bed? People died of hypoxia. Atypical drugs are available on the black market in abundance at exorbitant prices, while people cannot even buy a mask, as if they have taken an oath to kill all people. Health insurance fees are beyond their capacity.

· Regime parliament deputy from Nahavand protests the lack of CT scan, MRI, and ambulances as well as lack of medical staff

· Arak Medical University of Sciences: In recent days, the number of hospitalizations and deaths have increased a lot. If the situation continues like this, we will not be able to provide services in autumn and winter

The spokesperson for the regime’s Health Ministry put the number of victims in the past 24 hours at 219 and the number of patients in Intensive Care at 3,609. She told the state TV today, “The number of cities that are on alert has increased by 40%, and this is an alarm for us to observe the protocols more in these cities and impose more restrictions … For instance, in Mazandaran, daily hospitalization has increased three times daily, and ten cities have been added to the red cities of this province.”

As the regime refuses to allocate funds to deal with the Coronavirus, the situation in hospitals is deteriorating day by day. Sadegh Shahbazi, a regime parliament deputy from Nahavand, told the state-controlled Radio Farhang, today, “The lack of medical equipment, including CT scans, MRIs, ambulances, as well as the lack of medical staff, especially infectious disease specialists, have forced people to go to nearby cities for treatment.” The situation has become so bad that another regime parliament deputy from Gonbad Kavus, Amanghelich Shadmehr, told the parliament’s affiliated news agency, today, “The officials have learned to blame the people for everything… The (government) officials must explain what actions they have taken and what are they doing now? How many ICUs have they provided? For how long should people die while waiting in line for an empty ICU bed? How much ventilation have they provided? People died of hypoxia. They have to explain how much medicine have they prepared? Atypical drugs are available on the black market in abundance at exorbitant prices. How many shelters or tents did they provide for the poor? How much free mask did they give away? How many disinfectants did they give to the deprived people? People cannot even buy a mask. Come to your senses. It seems like they have taken an oath to kill all the people !!!” He added, “Health insurance fees are beyond what people can bear. They are asking 800,000 tomans per person for the renewal. Think about these poor people.”

Rouhani, who has so far denied any medical or health shortages, said today, “The Coronavirus problem will not be solved any time soon. We have a long way to go… In the coming months, we will have more hospitalizations than what we have had in the past four or five months… In this situation, we have to prepare ourselves in terms of hospitals, beds, as well as doctors and nurses. We have to know that a heavier burden is on our shoulders in the future.”

In Khorasan Razavi, Vice president of Health issues, for Sabzevar University of Medical Sciences, told ISNA news agency, yesterday, “This city has passed the red state in terms of the Coronavirus outbreak and is close to a critical situation.”

In East Azerbaijan, the Vice president of Tabriz University of Medical Sciences told Mehr news agency, yesterday, “The death toll in East Azerbaijan has increased significantly and was unprecedented during the past day setting a new record.” According to the Tasnim news agency, yesterday, “One in four Coronavirus patients in the Province is hospitalized in the intensive care unit,” said another university official. One thousand five hundred people working in the districts under Tabriz University of Medical Sciences have been infected with Coronavirus.”

In Central Province, the president of Arak University of Medical Sciences told ISNA, today, “In recent days, the number of hospitalizations and deaths has increased a lot … The city of Arak is red and in a dangerous situation. If we move towards the autumn and winter seasons in the same way, we will not be able to provide proper services to the people.”

While Iran sits on an ocean of oil and gas, the clerical regime's plundering policies have resulted in power outages, afflicting the Iranian people...
Read more
Statements

Given the country's infrastructure, and while Saeed Namaki, regime's Health Minister expressed his deep concerns over the "new rise of the disease" and...
Read more
Statements

On Tuesday morning, January 12, 2021, following the demolition of the home of an impoverished man in Pakdasht, defiant youths set fire to Khamenei's...
Read more