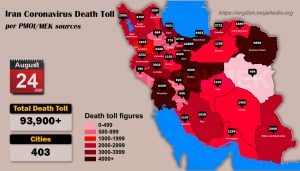 Mohammad-Javad Haghshenas, a member of Tehran’s city council, told the state-run daily E’temad Online, on August 22, “We saw, for example, that we were burying 120 to 130 people in Tehran’s Behesht-e Zahra Cemetery [every day], and then the death toll announced by the Health Ministry for the whole country equaled the number of [people buried] in Behesht-e Zahra.” He pointed out that the IRGC had filed a lawsuit against him about following up on the real statistics of the victims. In response to his inquiries about the actual statistics from the relevant authority, he was quoted by the same media as saying, “I understand that he (the relevant authority) was told that you must not give the figure. He was threatened … Finally, the mayor of Tehran agreed to send the figure by SMS to Mr. Hashemi, who would put it in the council group and then write confidential under it… Later a letter came from the honorable minister that these matters must not be made public, emphasizing that the matter should be followed in private meetings … God have mercy on all those who commit treason and play with the lives of people, their property, and their interests.”

Minoo Mohrez, a member of the NCCT, was quoted by IRNA, on August 24, as saying, “This fall we will see a combination of the Coronavirus and the flu. In the current situation, we cannot contemplate at all what will happen to the society in autumn and winter. We must prepare ourselves for more troubles. Many of these mourning ceremonies did not comply with the instructions of the Health Ministry. The Ministry has banned gatherings and parades. This is while many processions have been set up in the city … Many mourning gatherings have been held with large crowds. Closed environments are humid where the air conditioner is on, and this humidity increases the rate of virus transmission. In such cases, even if people wear masks, there is still a possibility of transmitting the virus. Most importantly, the virus exists in tears from the eyes, and those who cry, and touch everywhere are dangerous and can transmit the virus to others.”

Previous article
Iran: Women Political Prisoners in the Notorious Qarchak Prison Are in Dangerous and Catastrophic Conditions
Next article
Activities of Defiant Youth in Breaking the Atmosphere of Clerical Oppression