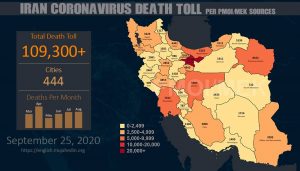 According to Moj state news agency, in a letter to the regime’s Interior Minister, Isfahan’s governor wrote: “If we do not come up with a rapid solution for the Province and the authorities of the NCCT are not assigned to the provincial headquarters, an irreparable event may occur. According to the University of Medical Sciences, the Coronavirus epidemic in the Province is currently in the most dangerous situation since the beginning of the outbreak. The daily number of patients has reached more than 1,000. Due to the limited capacity of hospitals, especially with a large number of medical staff (on leave for) contracting the virus, it is feared that with the current trend, the emergency services for other patients and the health section of the Province will face a crisis.”

Call for immediate action to secure the release of political prisoners and for an international inquiry into the condition of prisons Political prisoner Soheil Arabi,...
Read more
Statements