Iran-Lordegan protests: Mrs. Rajavi hails the protesters and urges youths to support them 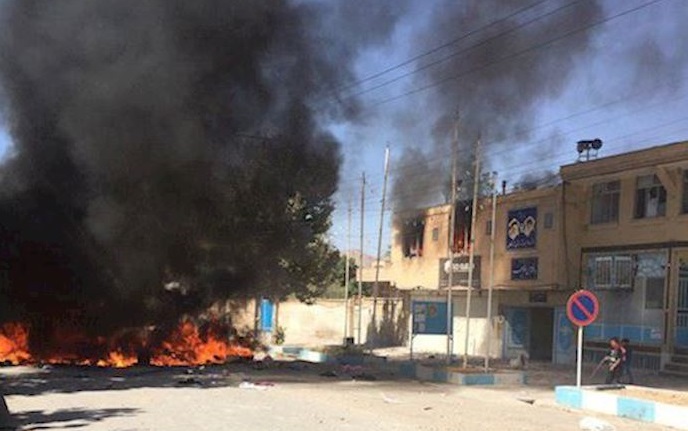 Iran: People of Lordegan protest, chant “death to the dictator,” set fire to the office of Khamenei’s Representative, the Governor’s Office

Mrs. Rajavi hails the protesters and urges youths to support them

This morning, Saturday, October 5, 2019, thousands of residents in Lordegan demonstrated against the mullahs’ regime in support of the residents of Chenar Mahmoudi village in Chaharmahal-Bakhtiari Province.

Angry youths set ablaze the office of the representative of the regime’s Supreme Leader Ali Khamenei and Lordegan Governor’s Office as well as several other regime’s centers.

The demonstration began outside the Governor’s Office and spread to the Health Department’s local office. The security forces attacked the protesters at both locations. The protesters defended themselves by throwing rocks. The suppressive forces fired live rounds and tear gas into the crowd to disperse them, wounding a number of demonstrators.

The protesters were chanting, “Down with dictator,” “have no fear, we are all together,” “neither Gaza nor Lebanon, I give my life for Iran,” and “incompetent official, resign, resign.”

On October 2, Khamenei told the Revolutionary Guards commanders, “Continuing the strategic depth is sometimes more imperative than the most important issues facing the country. Some people do not recognize this. Some pay attention and chant neither Gaza nor Lebanon to the benefit of the enemy.”

Women are playing a prominent role in the protests which began on October 2. The protesters broke the windows of the local health department and blocked the road to the village on October 3rd.

I urge all my fellow compatriots to rush to the aid of the flood-hit residents of Hormuzgan Province where a number of our countrymen have lost their lives.
After 40 years, the clerical regime has brought nothing to the people of except devastation, destruction and plunder

Mrs. Maryam Rajavi, the President-elect of the National Council of Resistance of Iran (NCRI), hailed the arisen people and youth in Lordegan. “With their chants of death to the dictator and attacking the office of the representative of the Iranian regime’s Supreme Leader Ali Khamenei, they targeted the clerical establishment as the main cause of all the atrocities perpetrated against the Iranian people,” Mrs. Rajavi said, adding, “This corrupt and criminal regime has squandered Iran’s national wealth by pursuing nuclear and missile projects and engaging in foreign warmongering, which has destroyed all aspects of life for the people of Iran, including health and well-being.” Mrs. Rajavi urged all the youth, especially in Chaharmahal-Bakhtiari Province and the neighboring areas to support the protesters and the victims of the inhumane policies of the mullahs’ regime.