Iranian State Media: The MEK Has Installed Banners of Massoud Rajavi and Maryam Rajavi Over Our Expressways 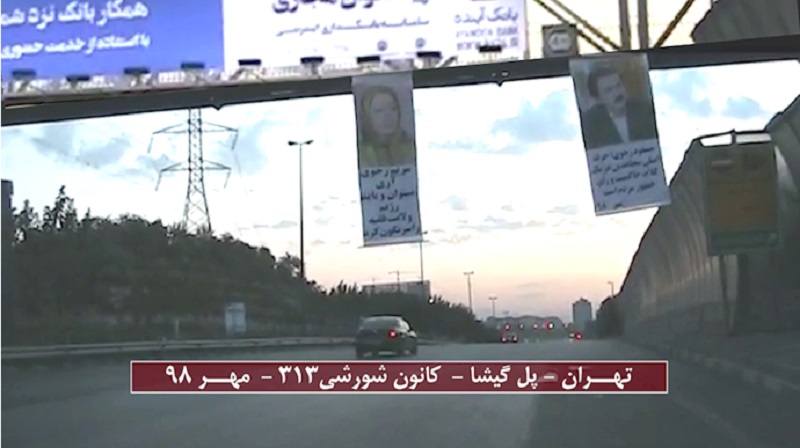 Iranian state media have acknowledged banners popping up in various Iranian cities in support of the leader of the Iranian Resistance Massoud Rajavi and the President-elect of the National Council of Resistance of Iran Maryam Rajavi.

On Friday, October 4, 2019, the state-run Khabar Fori (Breaking News) website published a photograph of the banners of the Iranian opposition leaders with the title:

“The [MEK] install banners of Massoud and Maryam Rajavi over the Hakim Expressway.”

The Khabar Fori report said: “The photograph below is related to banners of Massoud and Maryam Rajavi installed by the [MEK] over the Hakim Expressway.”

Between September 29 and October 2, 2019, defiant youths torched symbols of the mullahs’ regime and posters of Khomeini and Khamenei in different cities in Iran including Tehran, Ahvaz, Orumiyeh, Neyshabur, Amol, Sabzevar, Kuhdasht, Bandar-Abbas, Khoy and Mahshahr.

In a major campaign, the rebellious youths have set ablaze pictures of Khamenei, Khamenei and billboard and signs promoting the mullahs’ regime in cities across Iran demonstrating Iranian people’s loathing for the regime and a deep desire for change in Iran.

Last week, on the anniversary of September 27, 1981 uprising in Tehran, the Rebellious Youths torched large posters of Khomeini, Khamenei and a number of Revolutionary Guards (IRGC) and Bassij bases in different cities across Iran between September 22 and 27, 2019. The youths also posted pictures of the Iranian Resistance’s Leadership on walls and overpasses of different cities and signs with anti-government slogans such as Death to Khamenei, Long live freedom and Democracy and Freedom with Maryam Rajavi. These activities were carried out in cities such as Tehran, Tabriz, Shahr-e-Rey, Mashhad, Shiraz, Kermanshah, Orumiyeh, Ilam, Zahedan, Khoy, Ramsar, Omidiyeh, Chaboksar.

On September 27, 1981, the youths, supporters of the People’s Mojahedin Organization of Iran (PMOI/MEK) demonstrated chanting “Death to Khomeini” for the first time in central Tehran since 1979. Members of the IRGC opened fire to the crowd killing hundreds and arresting many more. The detainees were executed on the same day or the days that followed. The MEK has published names of 1142 fallen martyrs of the September 27th.

Previous article
Life in the Shantytowns: Result of Mullahs’ Rule in Iran
Next article
Iran-Lordegan protests: Mrs. Rajavi hails the protesters and urges youths to support them