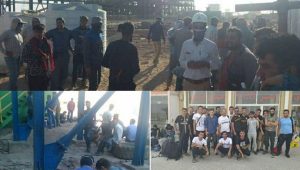 More and more workers and employees of companies and refineries are joining the strike every day. This morning, the contract workers of the Khatam base in phases 2 and 3 of Asaluyeh joined the other striking workers.

Fearing the continuation and expansion of the strike, regime agents announced that four months of the unpaid salaries of employees and workers of “Tanesh Gostar” company in South Pars power plant and one month of unpaid salaries of the workers of “Sanat Pajohan” company had been transferred to the workers’ accounts. But workers said they would continue their strike until all their demands are met.

At the same time, on their 55th day of the strike, the workers of Haft Tappeh Sugarcane Industrial Complex rallied in the city of Sush, today, and announced that they would continue to pursue their demands, including the dismissal of a regime-affiliated official who took over the complex under the pretext of privatizing the company.

Mrs. Maryam Rajavi, the President-elect of the National Council of Resistance of Iran (NCRI), hailed the perseverance of the striking workers and employees and called on the public, especially the youth, to rise up in their support. Mrs. Rajavi urged the International Labor Organization and trade unions to support the Iranian workers’ protests and to condemn the clerical regime’s anti-labor policies.

Previous articleIran: Coronavirus death toll in 373 cities is more than 84,900
Next articleLatest News in Brief – August 9, 2020