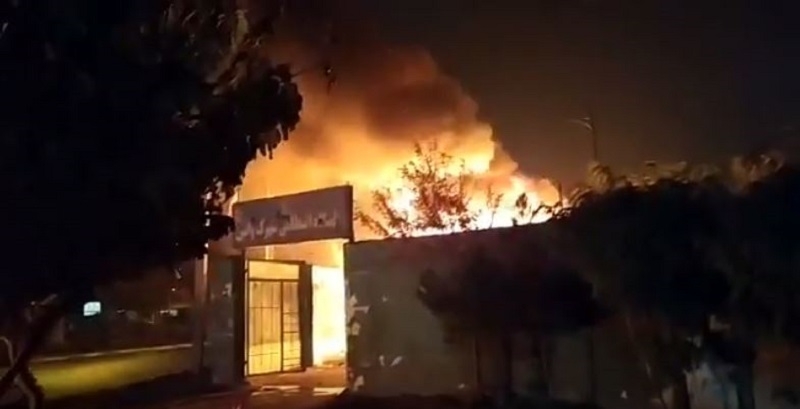 Protesters torched centers of repression and plunder, including Bassij bases and government-controlled banks in many cities-November 16, 2019

The uprising of the Iranian people throughout the country spread to at least 65 cities in 25 provinces. Security forces have killed eight protesters and injured many others in clashes between courageous youth and savage suppressive forces of the police, IRGC, paramilitary Basij, intelligence services, and plain-clothed criminals affiliated with the regime.

Protesters have torched centers of repression and plunder, including Bassij bases and government-controlled banks in many cities. Large posters of Khomeini and his successor Ali Khamenei, supreme leader of the regime, and a huge symbol of Khomeini’s ring in the city of Shahriar, in the southwestern suburbs of Tehran, were set ablaze.

Tehran is the scene of major protests and clashes between the people and IRGC forces despite the deployment of large contingents of suppressive forces at various points of the capital. People clashed with security forces and chanted “Death to Dictator” in the second roundabout in Aryashahr. Security forces resorted to tear gas to disperse protesting youth. Young protesters attacked the Basij base in Vafadar Street, a side street of Jomhouri Avenue. Other young protesters hurled rocks at security forces in northern Satar Boulevard and in Shush Square. The gold merchants of the bazaar closed down in solidarity with the protesters. Youth chanted, “Death to Dictator” and the rhyming “Guns, Tanks, Firecrackers, Mullahs should be killed,” in Satar Khan Street. Other young protesters in Eslamshahr, south of Tehran, torched the police container cabin and banners bearing images of Khamenei.