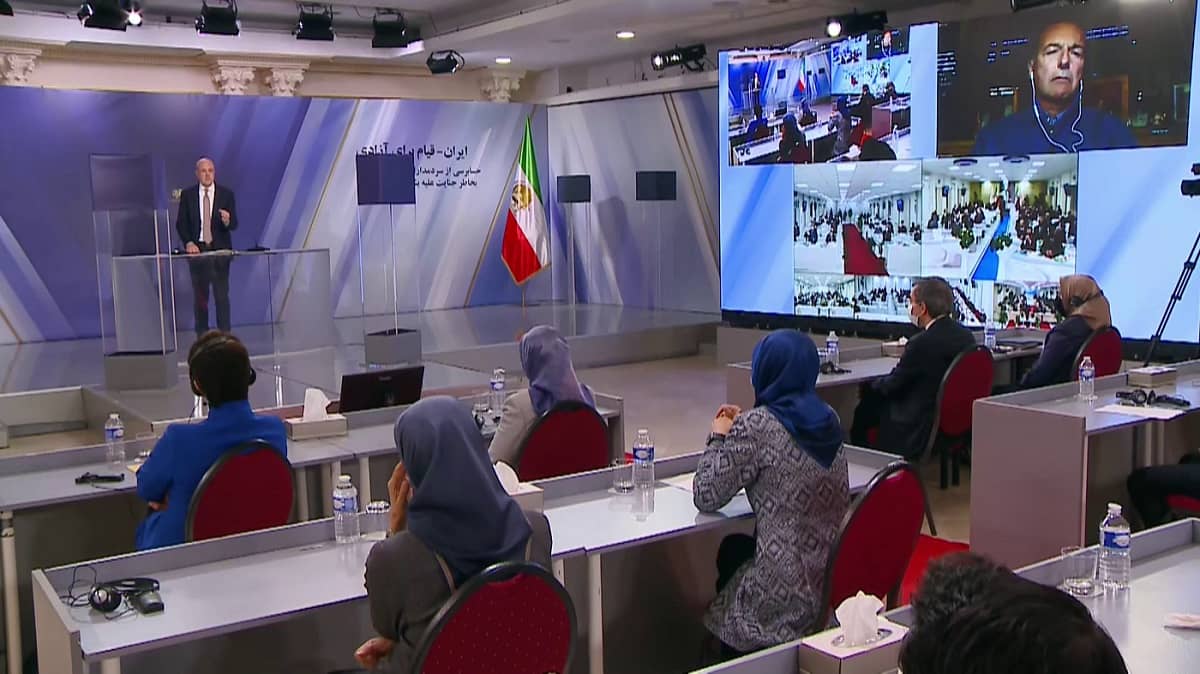 Mrs. Maryam Rajavi: The Iranian Resistance with its roots in the heart of Iranian society and its reliance on a movement of rebellious and combatant youths, as well as its role in the fight against extremism under the banner of Islam, has the power to bring about democratic change in Iran.

On Monday, January 17, 2022, a conference entitled “Hold Iran’s Regime Accountable for Genocide, Terrorism, and Nuclear Defiance,” was held at the headquarters of the National Council of Resistance of Iran (NCRI) in Auvers-sur-Oise (north Paris). NCRI’s President-elect Mrs. Maryam Rajavi,

In her keynote speech, Mrs. Rajavi described the clerical regime’s state of overthrow and said: This situation is first of all due to the Iranian people’s resolve for a fundamental change. The regime has no solution to contain the uprisings but through crackdown. Referring to the deep roots of the Iranian Resistance in the heart of Iranian society and its reliance on a movement of rebellious and combatant youths, as well as its role in the fight against extremism under the banner of Islam, she underscored that this resistance has the power to bring about democratic change in Iran. Reminding the failed experience of the West in supporting the Shah’s dictatorship until the last months of his rule she emphasized the need for a correct and responsible policy by the international community, especially the West, to stand by the Iranian people and recognize their struggle to overthrow the regime. This is the inalienable right of the Iranian people.

In his remarks, Mr. Verhofstadt questioned the impunity enjoyed by the regime. “The impunity crisis in Iran reached a peak in June when Raisi was appointed as the regime’s president. He is one of the main perpetrators of the 1988 mass murder of more than 30,000 political prisoners. Instead of being tried for crimes against humanity, he is occupying the post of presidency. This shows that impunity is rampant in Iran. The architects and perpetrators of genocides must always be brought to justice,” he said, adding, “Instead of being silent we must put our concerns for human rights violations at the forefront. A firm policy should also concern the nuclear deal with Iran. Talks with Iran should not be a smokescreen to not tackle human rights conditions in Iran. Any agreement should include a chapter on human rights and the rule of law in Iran.”

Mr. Bercow emphasized, “I back your call for a secular and democratic republic and support Mrs. Rajavi’s ten-point plan for a free Iran. The 1988 massacre must be investigated. Ebrahim Raisi must be prosecuted for crimes against humanity.” “He is a disgrace,” Mr. Bercow added, noting that “democracies must recognize that there is a key difference between dealing with other democracies and dealing with other countries whose regimes are non-democracies. The conciliatory approach has yielded no results. This is the point to send the regime a clear message that if they don’t suspend their nuclear program, the UN sanctions will be reapplied.” Expressing his support for the Iranian people’s protests, he added, “No to the Shah, no to religious dictatorship, no to theocracy, yes to democracy.”

In his remarks, Mr. Reinfeldt said, “Raisi is not in support of the Iranian people. He was chosen among a few men to keep control. The situation in Iran is especially worrying. There is a very dangerous combination. It brings together authoritarianism and religious dictatorship. In the name of Islam, they are saying it is right to hate each other and to kill people.” He added, “We need Europe to join together and stand up for values and push back against authoritarian rules, including the mullahs in Iran. They are a threat to the world by misusing Islam, by seeking nuclear weapons, and by destabilizing the region.”

Joining the conference via video, Mr. Frattini, said, “What should we do with this tyranny, this terrible regime abusing basic, non-negotiable rights, that kills thousands and thousands? Some people say there are differences between reformists and conservatives. This is not true. I was part of negotiations over Iran’s nuclear program in 2003, during the so-called reformist Khatami government. Those people were no different from those who are in office today. They wanted to get guarantees to have a free hand to commit abuses against their people. They are the same.”

He added, “Another argument is that we must lift sanctions because the sanctions are affecting innocent people. This is absolutely not true. As a matter of fact, the more money they have the more they will spend on its nuclear program and not on improving the quality of life in Iran. I support the idea of a stricter policy toward the regime regarding sanctions. We have to know every dollar spent for improving and strengthening the nuclear and military apparatus against the people, increasing the nuclear capacity to intimidate and dominate not only the people of Iran but also the region against the countries of the Middle East, and contributing greatly to destabilizing the Middle East.”

At this conference, a group of victims of the clerical regime’s crimes testified, including Ms. Zohreh Shafaei, a former political prisoner whose parents, two brothers and a sister were executed, Ms. Safora Sadidi, whose father was executed during the 1988 massacre of political prisoners and her uncle in the 2013 massacre in Ashraf. Ms. Azadeh Alemi, whose two uncles and a wife of one of her uncles were executed and whose mother was imprisoned for many years. She was in prison with her mother as a child.