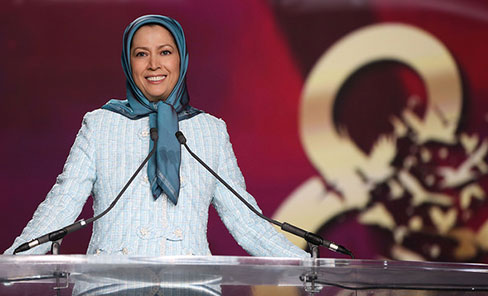 Maryam Rajavi: With women’s active and equal participation in political leadership, we will turn this century into the era of women’s emancipation

• Iranian regime’s elections was a competition among incumbent and former officials in charge of executions, torture and export of terrorism

• Participants pointed to the successful example of the Iranian Resistance in realizing equality and pioneering role of women. They emphasized that with solidarity and unity of action, women can play a decisive, key role in the fight against fundamentalism and realization of equality

NCRI – On Saturday, February 27, 2016, on the eve of the International Women’s Day, a grand gathering entitled, “Pledge for Parity: Women United against Fundamentalism” was held in the presence of the Iranian Resistance’s President-elect Maryam Rajavi and a number of political dignitaries, intellectuals, prominent personalities, and activists of the equality movement from 26 countries and four continents.

In her speech to the conference, Mrs. Rajavi addressed the Iranian regime’s sham elections saying that what was held yesterday was not an election of people’s representatives. It was a competition between the incumbent and former officials in charge of torture, execution and export of terrorism; something that foiled the myth of moderation of the regime.

As such, the sham election met with repugnance of the majority of the Iranian people and especially the youth. By holding this election, Khamenei seeks to further concentrate his regime on the war in Syria and on the misogynous suppression in Iran. However, it will be the beginning of an era of unprecedented fragility and decadence of the Velayat-e Faqih and he will not be able to do away with the consequences.

She added: “Mandatory veil, is an all-inclusive and permanent tool for suppression of women. In a matter of only one year, 3.6 million women were inspected and questioned on the streets for “improper veiling” and 18,000 women were put on trial. Common practice of violence and rape against women and widespread addiction and misery of women are among products of the mullahs’ corrupt Sharia. In Iran under the rule of the mullahs, polygamy, anti-human treatment of women and girl children, sexual abuse of girl children under 9 years of age are justified and imposed on women. Velayat-e Faqih is a senseless monopoly that is confronting women’s equal rights full force. Maryam Rajavi said: They have turned Iran into a big prison for women.

She reiterated: Anything that promotes compulsion, denies people’s free choice and anything that denies women’s equal rights is not Islam but against Islam. We do not tolerate violation of women’s rights in the guise of religion or under any other pretext. In the face of extremism, fundamentalism and exploiting the religion, we advocate democratic Islam. By realization of women’s equality and their active and equal participation in political leadership, we seek to turn this century in the name of women into the era of women’s emancipation. Our plan for tomorrow’s Iran is to establish a democracy based on freedom, equality and separation of religion and state, where death penalty is abolished. Equality in basic rights and freedoms, equality before the law, economic equality, equality in the family as well as freedom of choice of clothing and active and equal participation in political leadership.

Mrs. Rajavi addressed Iranian women and said: You and your pioneering sisters in Camp Liberty can and must sweep away the mullahs’ religious tyranny and all the fundamentalist groups emanating from it under any name. You can restore freedom to Iran, peace to the region and security to the world. You deserve to take your fate in your own hands in an Iran without Velayat-e Faqih. Women of the Iranian Resistance struggle so that the people of Iran, and especially women, could be free and able to exercise their right in determining their own destiny.

Ms. Sarvnaz Chitsaz, Chair of NCRI Women’s Committee, Ms. Zolal Habibi, member of PMOI Central Council, and Ms. Linda Chavez were the moderators of the program.
Nancy Pelosi, Minority Leader of the United States House of Representatives; Baroness Boothroyd, former speaker of UK House of Commons; US Congresswomen Loretta Sanchez and Judy Chu; and prominent French anthropologist and writer Françoise Heritier sent messages to the conference.
The speakers discussed ways of confronting Islamic extremism as the world’s main challenge. Pointing to the successful example of the Iranian Resistance in realizing women’s equality and pioneering role in all areas of struggle against fundamentalism, they stressed on Mrs. Rajavi’s leadership.

They declared that women are the main victims of fundamentalism. With solidarity and unity of action, they can play a significant and key role in combatting this ominous phenomenon that has surpassed all geographic borders and all limits of violence, today. The grand gathering featured a performance by a Syrian child depicting the pain and suffering of the people of Syria, performances portraying executions of young Iranian women and the role of mothers of political prisoners, also the tragedy of acid attacks on young women of Iran.
A group of musicians from Albania, Mmes. Marjan and Gisoo Shakeri, renowned singers and members of the Iranian Resistance, as well as young Iranian singer, Ms. Ayda, performed in the Paris gathering.

Secretariat of the National Council of Resistance of Iran
February 27, 2016