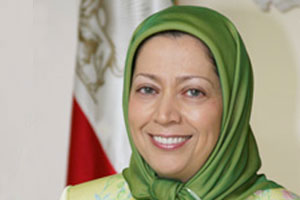 International Workers’ Day on May 1, and praised their struggle and resistance against injustice, exploitation and all kinds of anti-human and anti-worker oppression by the Velayat-e faqih regime (absolute rule of clergy).

She also saluted the unyielding workers who are on strike in the regime’s prisons, and called on all Iranians, especially the youth, to show their solidarity with these courageous workers.

Referring to incessant strikes and protests of workers, she called the past year the year of the spread of Iranian workers’ protests, and added: “The right to form workers’ independent syndicates and unions, the right to hold strikes and protest gatherings, job security, the fair and real increase and timely payment of wages, revocation of the temporary and blank contract system, removal of employment offices that work in favor of employers, establishment of unemployment and life insurance, not raising the retirement age, life security for workers against arduous labor in mines, revocation of gender discrimination in employment, salary and fringe benefits for female workers, and prohibition of street children slavery are among the trampled rights of the Iranian workers.”

She reiterated that achieving all these rights is possible through the united and unyielding struggle of workers linked with all Iranians’ resistance for freedom, democracy and overthrow of the ruling regime.
Mrs Rajavi said: “The current deep and spreading economic crisis, whose first victims are workers and toilers, is the outcome of the infamous rule of the mullahs that have spent Iran’s assets on the Revolutionary Guards, the terrorist Quds Force, war in Syria, meddling in Iraq, and their own untold plunder. Almost all Iranian workers are under the poverty line, they are denied job security, at least 70% of them are not even confident about receiving their salary, the workers’ minimum wage is so far from the poverty line that it has turned Iranian workers into one of the cheapest labor forces in the world. Workers are deprived of their justified rights almost everywhere, there is no limit to their exploitation, and there are a significant number of workers who have had to sell a kidney to provide for their livelihood. More importantly, women are further victimized by sackings, anti-human oppression and low wages. Also, three million child workers in Iran constitute a painful manifestation of the oppression of plunderers ruling Iran.”
Secretariat of the national Council of Resistance of Iran
April 30, 2014