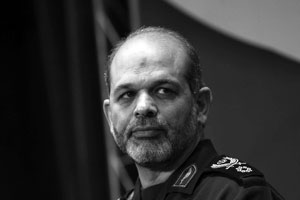 NCRI – A senior Iranian Revolutionary Guard commander has rejected calls by the West for Iran to return to the international community, in favour of the ‘export of revolution’ – understood to mean the regime’s support for terrorism and fanaticism.

Brigadier General Ahmad Vahidi, the head of Armed Forces General Staff Headquarters Defense Research Center said: “When we say we must build the world, we mean to export the revolution and build the world, based on the doctrine”of the regime.

“Those who tell us to return to the international community mean that we must set aside our revolutionary ideals, anti-arrogance (anti-West) identities and our efforts to expand revolutionary and Islamic thought.”

He added in the speech at the IRGC’s Imam Hossein University on Wednesday: “The Islamic republic has been able to spread the anti-arrogance message around the world step by step. We should consider this phenomena as one of the most important elements of power.”

Vahidi has been wanted by Interpol since 2007 for his role in the bombing of the Jewish community center in Buenos Aires, Argentina, on 18 July 1994, in which 85 people died. He was serving as the commander of a special IRGC Quds Force unit when the attack occurred. He is one of five Iranian regime officials sought in the bombing.

In June 2010, Vahidi was blacklisted by the US Government, a measure aimed at freezing the assets of proliferators of weapons of mass destruction (WMD).

The U.S. Department of State ‘Country Report on Terrorism 2013’ published on Thursday stated that: “In 2013, Iran’s state sponsorship of terrorism worldwide remained undiminished through the Islamic Revolutionary Guard Corps-Qods Force (IRGC-QF), its Ministry of Intelligence and Security, and Tehran’s ally Hizballah, which remained a significant threat to the stability of Lebanon and the broader region.”