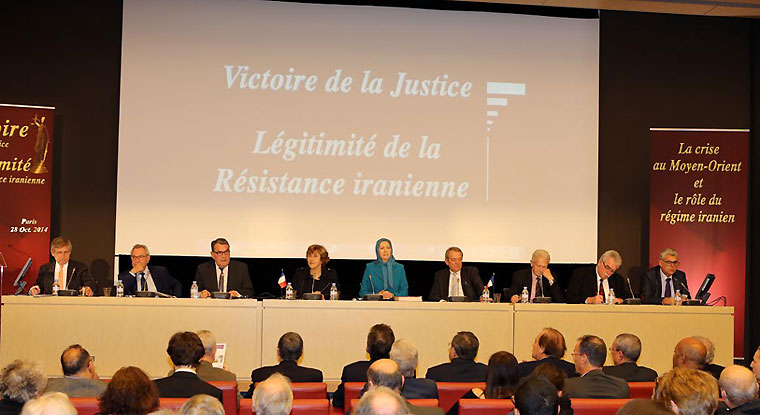 In a conference at the French National Assembly

Maryam Rajavi: To confront extremism one should depend on a pure, tolerant and democratic Islam

On Tuesday, Mrs. Maryam Rajavi, President-elect of the Iranian Resistance, stipulated: “ISIS is the by-product of unprecedented crimes of mullahs in Iran, Bashar al-Assad in Syria, Maliki in Iraq, and their sectarian policy against a large section of the population in Iraq and Syria.”

Rajavi firmly ruled out the participation of the Iranian regime in the fight against ISIS that is promoted by regime’s lobbies and said: “This would be the greatest blow to the coalition because the Iraqi and Syrian nations would then see the coalition as siding with their archenemy – the mullahs.”

Noting that it was through a belief in such an interpretation of Islam, and by advocating it, that the People’s Mojahedin Organization of Iran (PMOI/MEK) succeeded in presenting a cultural and social antithesis to this fundamentalist regime in Iran, she stressed: “Support for the Iranian Resistance will make this cultural alternative known to the public and thus contribute to attempts to curtail the recruiting of European youth by the fundamentalist forces.”

Rajavi emphasized the need to emancipate the region from the fundamentalist terrorists, by defining the real political sidings in the region, and with the participation of anti-fundamentalist and patriotic forces.

The President-elect of the Iranian Resistance was speaking at a meeting in the Victor Hugo Hall at the invitation of the parliamentary committee for a democratic Iran (CFID) made up of legislators from the whole political spectrum at the French parliament.

This parliamentary conference was held at a time when, only recently, French judges had brushed aside all charges against the Iranian Resistance that had been brought up more than a decade ago following the collaboration of the French government with the mullahs’ regime. The French judges issued an order to conclusively end this prosecution; thereby terminated an entire political file after fourteen years.

Speakers condemned the visit by Iranian regime’s parliament head of National Security and Foreign Policy Committee to France and stated that at a time when the violation of human rights and the meddling of the regime in the region has taken unprecedented dimensions, such visits work against peace and human rights in Iran and the region. They called on the French legislators and officials to publicly and officially express, to the representative of the Iranian regime, the repugnance of the French people, parliament and government regarding crimes such as the acid attacks on women, the hanging of a young woman acting in self-defense against an attempt to violate her, and the collective executions during Rouhani’s tenure that amount to over 1,000 hangings; otherwise, such visits will completely benefit the Iranian regime. 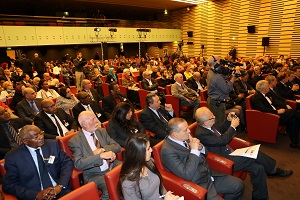 Maryam Rajavi denounced the West’s inaction in the wake of the crimes of the Iranian regime in supporting the Assad dictatorship and noted the destructive rule of the Shia militias affiliated with the Iranian regime in vast sections of Iraq that is taking place through cooperation with Maliki’s forces and said: “During these years, not only did the United States not voice any protest against these actions, but they praised Maliki’s measures. The by-product of these crimes was the expansion and strengthening of ISIS in Syria and Iraq. This was the outcome of showing leniency towards the most horrendous dictatorship in contemporary times and its proxies.” She warned: “And now, the mullahs of Iran are exploiting this policy by the West; poised to fill the vacuum created by the ISIS retreat as a result of the international coalition attacks with the militias.”

Assessing the nuclear negotiations between the P5+1 and the Iranian regime she said: “The Iranian regime is trying to preserve its nuclear weapons projects by exploiting the policy of appeasement and by employing all kinds of deceptive tactics.” She went on to warn: “Any deal should include the unconditional implementation of the Security Council resolutions, a complete halt of all enrichment, and intrusive inspections of all sites and suspicious centers; otherwise, the path of this regime to obtain the nuclear bomb will remain unimpeded.”

Rajavi describes the West’s inaction as unacceptable, regarding the cruel suppression of the Iranian people by the ruling religious fascism, including tormenting political prisoners to death, the harassment of religious and ethnic minorities and the arrest, pressuring and incarceration of lawyers, journalists and internet activists. Rajavi called for effective measures to end this tragic situation.

Referring to the escalating suppression during Mullah Rouhani’s tenure, with over 1,000 executions on his record, and now the crime of splashing acid on women, Rajavi said: “This is the true nature of the Iranian regime which is the Godfather of ISIS and its tyranny and cruelty towards the Iranian people is a hundredfold worse than the actions of ISIS.”

Rajavi continues: “Mullahs have been defeated by the Iranian women. Their reactionary impositions on the Iranian society have reached a dead-end and their rule is extremely shaky and unstable. They cannot save themselves with this blatant barbarism and the tyrannical execution of Rayhaneh Jabbari.”

The President-elect of the Iranian Resistance expressed hope that with the removal of Maliki in Iraq, the French government would use all means possible for Camp Liberty to be recognized as a refugee camp under the United Nations’ supervision, for the siege and in particular for the medical blockade to be lifted and to provide and guarantee minimum security and well-being standards to the residents for as long as they are in Iraq, for the seven hostages of the September 1 massacre in Ashraf including six women to be freed, and to have the United Nations conduct an investigation into this great crime and bring its perpetrators to justice.

ct an investigation into this great crime and bring its perpetrators to justice.