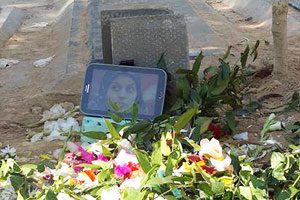 NCRI – The agents of the Iranian regime’s Ministry of Intelligence and Security on Tuesday prevented the family of Reyhaneh Jabbari from holding a public memorial event three days after her execution despite the international campaign to spare her life.

Reyhaneh’s family was forced to hold the memorial inside their house. The execution of the 26-year-old woman who had been arrested at the age of 19 for killing an MOIS agent in self-defense following his attempt to sexually assault her during a deceptive plan.

Despite these limitations imposed by the Iranian regime, who feared the memorial event would turn into a public protest against the regime’s brutal crimes against Iranian women, a large group of family members and friends attended the event, according to reports received from Iran.

The execution of Reyhaneh Jabbari prompted worldwide condemnations by international human rights organizations and governments across the globe.

The Canadian Foreign Minister, John Baird, said in a statement “Canada condemns in the strongest possible terms Iran’s execution of Reyhaneh Jabbari, a 26-year old interior designer and the latest victim of a murderous regime.”

“Canada strongly believes that due process and the rule of law are fundamental to ensuring human rights and dignity. By failing to accord Ms. Jabbari due process, Iran has once again cynically demonstrated its unwillingness to live up to international human rights obligations and to respect the dignity and rights of its people. The people of Iran, and on this day particularly the family of Reyhaneh Jabbari, deserve better,” he added.

Dr. Ahmed Shaheed, who was “shocked” by the hanging of Reyhaneh Jabbari, described a “surge in executions,” giving Iran the world’s highest death penalty rate per capita.
The UN High Commissioner for Human Rights and the European Union on Tuesday joined a worldwide chorus of condemnation of Jabbari’s execution.

“We are shocked and saddened by the execution,” the office for UN High Commissioner for Human Rights said in a statement.

The European Union said it was “appalled” by the execution, expressing its “strong opposition to the death penalty, which is cruel and inhumane, as well as irreversible.”

Mrs. Maryam Rajavi, the President of the National Council of Resistance of Iran (NCRI) called for an independent international probe into the execution of Reyhaneh Jabbari as an example of arbitrary, extrajudicial and criminal death sentences that have undertaken added dimensions since Rouhani’s tenure.

Speaking at a conference at the French National Assembly on Tuesday she told French lawmakers and dignitaries: “Mullahs have been defeated by the Iranian women. Their reactionary impositions on the Iranian society have reached a dead-end and their rule is extremely shaky and unstable. They cannot save themselves with this blatant barbarism and the tyrannical execution of Rayhaneh Jabbari.”

Amnesty International, which had campaigned for Jabbari’s release on Saturday, called the execution “another bloody stain on Iran’s human rights record”.

“Once again, Iran has insisted on applying the death penalty despite serious concerns over the fairness of the trial,” the human rights organization said on its site.

Friends of a Free Iran group in the European Parliament said the execution of Reyhaneh Jabbari shows that ‘moderation’ with the new Iranian President Hassan Rouhani is nothing but a myth.

“We are totally outraged of the news of execution of Ms. Reyhaneh Jabbari, a 26-year-old Iranian decorator who was kept in jail for the past 7 years for having defended herself against a sexual aggression by an intelligence officer of the Iranian regime,” the group said in a statement.

Reyhaneh Jabbari’s heart-rendering last words in a voice message to her mother Mrs. Shole Pakravan, distributed by the National Council of Resistance of Iran (NCRI), was widely covered in the news media across the world and millions of online users expressed their outrage at the crime committed by the Iranian regime.

In the voice recording on April 1, 2014 addressing Mrs. Pakravan she said: “…the court charged me with being cold-blooded in the murder and of being a cruel criminal. I shed no tears, did not beg, and did not cry out loud since I believed in the support of the law… how naïve were we that we expected justice from the judges. I embrace death because in the court of God I charge the investigative officers, I charge the interrogator, I charge the judge of the Supreme Court of the country, those who severely beat me… In the court of the creator of the world I charge… all those who inattentively, falsely or out of fear wronged me.”