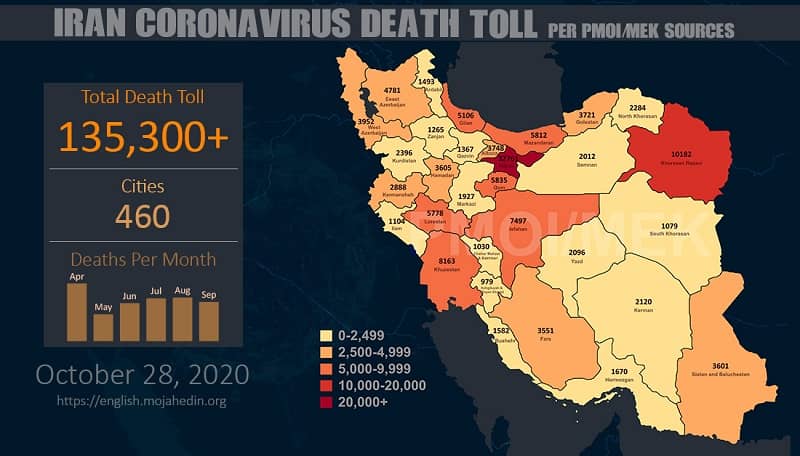 New official record: 415 fatalities in 24 hours based on state figures, 100% increase in less than three weeks

In an unprecedented announcement of the regime’s engineered statistics, Tehran’s Health Ministry Spokesman said that the number of fatalities over the past 24 hours reached 415 and 6824 new cases have been reported. 5012 patients are in critical condition. As such, the official number of fatalities has doubled in less than three weeks.

Today, the regime’s president Hassan Rouhani once again expressed worry about the real proportions of the Coronavirus crisis and said: “Sometimes there are conflicting things being said in various provinces by different individuals in their interviews, which causes confusion among people. In accordance with [Khamenei’s] guidance, we have appointed a spokesperson so that people can trust only his statements. … From now on, his statements will be the official statements.”

Mrs. Maryam Rajavi, the President-elect of the National Council of Resistance of Iran (NCRI), described the increasing and unbridled trend of Coronavirus patients and victims as the direct outcome of the inhumane and unpatriotic policies of Khamenei and Rouhani. Human lives are completely worthless in their eyes. She said while the regime spends exorbitant amounts of money on procuring smuggled weapons, its nuclear and missiles projects, and warmongering, export of terrorism and fundamentalism, Iranian workers, nurses, medical personnel, white-color workers and teachers cannot afford basic daily needs due to the unhinged inflation. This is while entities controlled by Khamenei have amassed more than a trillion dollars worth of assets belonging to the Iranian people. These funds remain untouched. The control of these entities must be turned over to the Iranian people. Moreover, one armed forces is enough for the regime. The Islamic Revolutionary Guard Corps (IRGC) and the paramilitary Bassij must be dismantled and their budgets must instead be re-allocated to the fight against the Coronavirus.

Secretariat of the National Council of Resistance of Iran (NCRI)
October 28, 2020