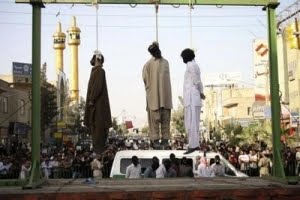 In a barbaric act on Wednesday, February 5, the anti-human clerical regime secretly and collectively hanged 15 Baluchi political prisoners in the prison of Chahbahar. Khossrow Barahoui, a local from Loutak in Zabol, two brothers from Rigi tribe, two brothers from Mir tribe, and a merchant by the name of Afzal Rigi are among those who have been hanged.

According to the reports published, also on the previous day, seven prisoners were secretly buried in nameless graves in a desolate place at the Zahedan cemetery.

At the dawn of February 6, two prisoners by the names of Parviz Ashna from Bandar Abbas and Farhad Soltani from Kermanshah were executed in the central prison of Bandar Abbas. The execution of a 29 year old in Zahedan prison on February 1 was yet another execution that was registered last week.

Therefore, the number of executions in the first five weeks of this year reaches 107.

Spread of a wave of executions in many cities particularly in deprived regions demonstrates the fear of the detested clerical regime of the uprising of the peoples of these regions that are under intolerable pressures.

The Iranian Resistance calls on the UN Security Council, the United States, the European Union, and the human rights defenders the world throughout to resort to urgent action regarding the arbitrary and collective executions of this year that have taken on an unprecedented scale. Continuation and expansion of economic and diplomatic relations with this regime and ignoring these anti-human crimes, with whatever pretext, only encourages the continuation and intensification of group executions and thus must be stopped.

Secretariat of the National Council of Resistance of Iran
February 8, 2014