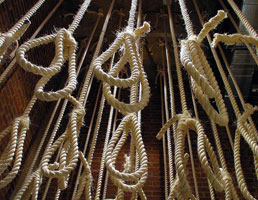 The antihuman regime of mullahs sent to gallows eight inmates collectively. They were imprisoned in the Dizel-Abad prison in Kermanshah, one of the most gruesome prisons of Iran. One of them was Vali Khan Nazari who had spent 19 years in prison.On April 22, five prisoners were executed in the Gohadasht prison.

On April 21, six inmates, including a 20 year old prisoner,were hanged in the Ghezel-Hessar prison in Karaj.

On the same day, three inmates, one of whom 20, were executed in Mashhad.

On April 17, four prisoners were hanged in Bandar-Abbas prison. Three of the executed were Ahmad Rahimi, Ali Fouladi and Ali Sharifiwho were 17, 16 and 14 respectively when they were arrested.
On the same day, SamkouKhorshidi, 32, a Kurd prisoner, was sent to gallows in Kermanshah on the charge of ‘Moharebeh’ (enmity against God).

Two inmates by the names of Rasoul Fakhireh,50, and Ali Arab, 32, were also hanged in Zahedan’s central prison on April 19 and April 22.

Accordingly, since the brutal attack on political prisoners in Evin on April 17, 29 inmates have been executed in various cities.At least three of them were juveniles at the time of apprehension.

Secretariat of the national Council of Resistance of Iran
April 25, 2014