Iran: 32 executions in one week, including two women 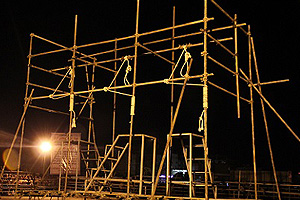 Youths in Karaj attack executioners during public hanging of three

Wednesday morning, July 29, the youths in Karaj attacked the regime’s executioners by hurling stones and clashing with them in protest to a public execution of three in Golshahr, Karaj, thereby breaking up an attempt by the authorities to ratchet up an atmosphere of terror in the society. In fear of the expansion of the people’s wrath, the executioners quickly wrapped up the scene of their crime and left.

On July 27, eleven prisoners, between 25 to 35 years of age, were executed in Karaj’s Ghezel Hesar and Central prisons. Nine of them were collectively hanged in the Central Prison.

The criminal executions of the past week, the announcement of a death sentence for political prisoner Mohammad-Ali Taheri, and the destruction of a Sunni prayer house in Tehran on July 29, concurrent with visits to Iran by senior European officials, demonstrate that the West’s overture toward this regime, in the aftermath of its “drinking the chalice of poison” of the nuclear deal, only emboldens and encourages a regime fighting for its survival to ramp up its suppression of the Iranian people.

Secretariat of the National Council of Resistance of Iran
August 1, 2015