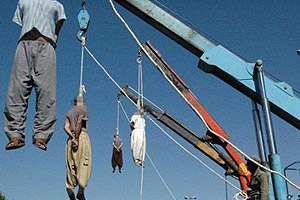 NCRI – This morning the mullahs’ regime hanged yet another three prisoners in the city of Rasht, northern Iran.

The three people were hanged at dawn on Saturday in the Central Prison of Rasht. The three prisoners were identified only by their initials and age: S.J., 58; M.M., 38; and M.P., 31.

Iran’s fundamentalist regime also on Wednesday hanged four people, two of Iranian origin and two of Afghan origin, in the Dastgerd Prison in Isfahan, central Iran, which is infamous for the appalling human rights abuses that go on there.

Three other death-row prisoners in the southern city of Bandar Abbas were on Thursday transferred to solitary confinement in preparation for their imminent execution. They were identified as Yousef Shahnavazi Shahdadi, 25; Kamran Zarei, 47; and Jamal Kasebkar Darandeh, 45.

Their relatives on Friday went to the prison to meet for a final time with their loved ones.

Three other death-row prisoners have been transferred to solitary confinement in Zahedan Prison, south-east Iran, in preparation for their execution.

At least 44 prisoners, including two women, have been executed in Iran, in some cases in public squares, since July 22.

Faced with escalating popular discontent and unable to respond to the rightful demands of the majority of the Iranian people who are living under the poverty line, the religious fascism ruling Iran – dubbed the ‘godfather of ISIS’ by the Iranian people – is ramping up suppression and human rights abuse.

Previous articleIran: 32 executions in one week, including two women
Next articleMore than 500 on hunger strike in new Iran prison