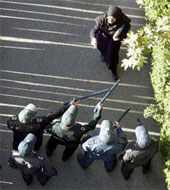 Supreme Leader Ali Khamenei appointed Brig. Gen. Ismail Ahmadi Moqaddam as the commander of the State Security Forces, SSF. He was hitherto the number two in the paramilitary Bassij and commander of the force in Greater Tehran. He is also a key official involved in the crackdown on women, young people and students in Tehran.

Khamenei’s appointment of Ahmadi Moqaddam and putting the SSF under the Islamic Revolutionary Guards Corps (IRGC) and Bassij control was designed to step up intimidation and terror and confront the increasing wave of discontent and public protests inside the country.

In his decree, Khamenei underscored that the primary role of the SSF was "to create security all over the country at a level worthy of the Islamic Republic".

Ahmadi Moqaddam is a long-time ally of the mullahs’ new president Mahmoud Ahmadinejad. The two were IRGC commanders in Hamzeh Garrison near the northwestern city of Orumieh, were both of them worked closely in the crackdown on Iranian Kurds in the 1980s.

Expressing support for Ahmadinejad, he said in 2004, “With the kind of work he has done, the Mayor of Tehran has gained popularity and appeal among the people and we must learn from him.”

Ahmadi Moqaddam and the forces under his command played a decisive role during the sham presidential election to secure Ahmadinejad’s victory. Officials and the media had voice protest over his remarks to mobilize the paramilitary Bassij in engaging in fraud and rigging in favor of Ahmadinejad. He rejected those charges and said, “This is part of a campaign against the Bassijis. Some people want to create crisis even before the election results are announced.”

In a gathering of the Bassij in the town of Khomein two years ago, Ahmadi Moqaddam fully supported the takeover of the US embassy in Tehran. “Some people inside the country have turned their backs on Imam Khomeini and are now saying that they regret that they once climbed over the wall of the US nest of spies,” he said.

Secretariat of the National Council of Resistance of Iran
July 11, 2005