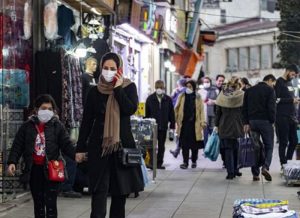 The clerical regime has taken unprecedented measures to cover up the Coronavirus staggering fatalities because it is terrified of popular outrage and uprisings. According to the Intelligence Ministry’s directive, the internal portal for the country’s Civil Registration has been shut down to prevent the information about the death toll from leaking. Tehran Civil Registration, which publishes a monthly table and causes of deaths in the Province, did not publish this table for March 2020. The table was published on a monthly basis in the first 11 months of the last Iranian calendar year (ending on March 20, 2020). According to the regime’s official news agency since “three days ago, the universities of medical sciences refuse to provide statistics of those dead or infected as a result of the Coronavirus in every province.”

Yesterday, the Ministry of Health Spokesman said that one-third of the deaths in the last two days had occurred in Tehran, which recalls the congestion in Tehran’s public transportation and traffic. Meanwhile, today, Alireza Zali, head of Tehran’s National Coronavirus Combat Taskforce, told Vatan Emrouz state-run daily, “During the past 24 hours, 399 new patients have been hospitalized for Coronavirus infection in Tehran.”

Protests over Ali Khamenei’s refusal to release funds from the conglomerates and cartels under his and IRGC’s control to pay for the poor continue. Yesterday, during his speech at the parliament Mostafa Kavakebian , said “A month ago, I asked why the resources available to the government, such as Mostazafan (Abased) Foundation, the Headquarters To Execute Imam Khomeini’s Order, and the Astan-e Quds Razavi Endowment, are not being used?… It’s time that all governmental and non-governmental institutions, the large and vast state-owned companies, help out. We should not politicize Coronavirus. Now is not the time to try to settle factional accounts … If we want to complain, the biggest issue is why despite being aware of the Coronavirus, the government and the Ministry of Interior held the parliamentary election on February 21, 2020?”

Yesterday, Gholamreza Heydari, another regime parliament deputy, speaking at the same parliament’s public session, said, “The assets of these institutions belong to the nation and the country. It’s only right that the Mostazafan Foundation, the Headquarters To Execute Imam Khomeini’s Order and various Astans (conglomerates) with financial resources and income, to give their assets to the people voluntarily and without acting like they are doing a favor or charity.” Heydari, whose speech was published by the state official news agency ILNA, added, “Using these assets requires Khamenei’s order.”

In another development, today, the state-run daily, Arman writing about child laborers and the possibility of their infection, wrote: “We can’t stay at home because hunger is more deadly than the Coronavirus, and you can’t stay quarantined on an empty stomach.” According to the Ministry of Labour, 409,000 active child laborers have been identified, most of whom work as peddlers, selling flowers, fortune tellers, and garbage collectors. Garbage collecting children are still working these days; they can be seen searching the trash in one out of every five trash bins,”

Commenting on the Coronavirus death toll surging past the 30,000 thresholds, the appalling and heartbreaking predicament of child labors, and the infection of many of them, Mrs. Maryam Rajavi, the President-elect of the National Council of Resistance of Iran (NCRI), said, the massacre of the brave MEK and rebellious youth by the religious theocracy has now been extended to the mass murder of this nation’s children amid the Coronavirus tragedy. The only way out is to uproot the evil clerical regime and cleanse our homeland from the Coronavirus and the mullahs’ virus.”

Secretariat of the National Council of Resistance of Iran (NCRI)
April 16, 2020 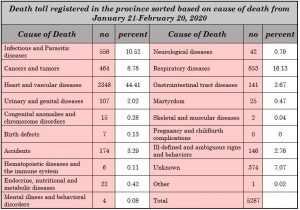