Iran: Criminal Sentences of Execution and Prison for PMOI/MEK Supporters 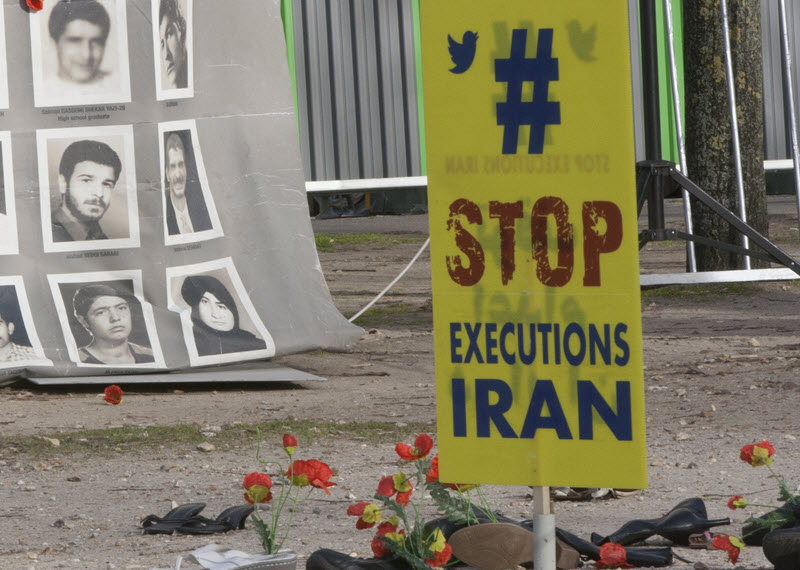 On Sunday, May 19, 2019, a court in Tehran headed by notorious henchman Mohammad Moghiseh, sentenced a political prisoner, Abdullah Ghasempour, on mullahs-made charges of “aggression”, “assembly and collusion against the regime,” and “membership, propaganda and cooperation with the People’s Mojahedin Organization (PMOI/MEK)” to death.

The same court sentenced three other prisoners, Mohammad Hossein Ghasempour (brother of Abdullah Ghasempour), Alireza Habibian (a relative of Ghasempour) and Akbar Dalir, to five and a half years in prison for similar charges. The four prisoners were arrested in May of 2018 by repressive forces and taken to Evin Prison.

The criminal mullah Mohammad Moghiseh (Naserian) is a henchman who has been interrogating and torturing political prisoners since the 1980’s, and during the massacre of 1988, he sent scores of prisoners to death squads in Gohardasht Prison. The Iranian Resistance in the book “Crime Against Humanity” in 2001 and in the book “Fallen for Freedom, A List of 20,000 PMOI Martyrs” in 2006, while mentioning some of the Moghiseh’s crimes, listed him as someone who must be tried for crimes against humanity.

While the clerical regime has been unable to cope with the rising social and growing activities of resistance units and resistance councils, it tries in vain to control the situation and to prevent increasing popular uprising by widespread arrests, criminal death sentences and long-term imprisonment.

On April 19, Mahmoud Alavi, the clerical regime’s Minister of Intelligence, reported the arrests of 116 teams associated with the MEK in the past year. Subsequently, the Director General of the intelligence ministry in East Azerbaijan Province on April 24, 2019, announced that there had been 110 arrests and encounters with the Mojahedin in the province in 2018. The People’s Mojahedin Organization of Iran (PMOI/MEK) announced the names of 31 arrestees on April 23 and May 17, 2019.

The Iranian Resistance calls on the Secretary-General, the High Commissioner and the Human Rights Council of the United Nations and international human rights organizations to take urgent action to save the lives of Abdullah Ghasempour and other political prisoners facing torture and executions and long term imprisonment, and calls for the appointment of delegations to visit the regime’s prisons and to meet with political prisoners.

Secretariat of the National Council of Resistance of Iran
May 22, 2019