IRAN: Denial of medical care is being used to torture political prisoners 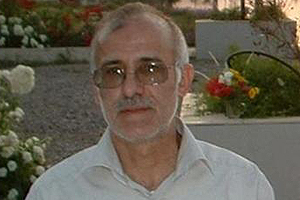 Call for immediate action to secure prisoners’ access to necessary medical services
NCRI – Monday night, November 30, the condition of political prisoner Ali Moezzi who is kept in Ward 8 of Evin Prison (Tehran), turned critical. Mr. Moezzi who suffers greatly due to the obstruction of intestine was prevented by henchmen from being transferred to the hospital. Following protests by the political prisoners in Evin’s Ward 8, he was taken to the prison infirmary, but was returned to the ward shortly afterwards without receiving any treatment.

Mr. Ali Moezzi who is a political prisoner of the 1980s suffers of various diseases, including cancer and acute kidney disease, due to years of torture and imprisonment in Iranian regime’s dungeons. Nonetheless, along with a number of other political prisoners, he staged a hunger strike in the recent days to protest the suppression and the arrest of families of political prisoners and their supporters.

In Karoun Prison of Ahwaz regime’s henchmen are preventing medical treatment to Gholamreza Kalbie, a political prisoner and supporter of People’s Mojahedin Organization of Iran (PMOI/MEK). Mr. Kalbie was arrested in January 2001 and after months of detention and torture in solitary confinement in Karoun Prison and Ward 209 of Evin was sentenced to death by the regime’s judiciary. Following international pressures, his sentence was commuted to life in prison. Mr. Kalbie suffers of many illnesses, including arthritis of the back and the knees, lung disease, and various infections, due to 15 years of imprisonment and torture in regime’s medieval prisons. After his transfer to the hospital and despite the emphasis by the doctors, he was returned back to prison without receiving any treatment.

Political prisoner Meisaq Yazdan-nejad, a relative of PMOI (MEK) members in Camp Liberty who was in dire condition, was transferred out of Gohardasht (Rajai Shahr) Prison on October 26 on the pretext that he is being transferred to the hospital. After stalling his family’s inquiries for several days as to where he has been taken, it was finally determined that he had been transferred to Ward A2 of IRGC in Evin Prison and subsequently moved to Ward 240. Mr. Meisaq Yazdan-nejad was arrested in September 2007 when he was only 19 and a student because of his participation in a memorial ceremony for the massacre of 30,000 political prisoners. He underwent severe tortures and was sentenced to 13 years in prison.

Likewise, regime’s henchmen obstructed the hospitalization of Abolghassem Fouladvand, a relative of PMOI (MEK) members in Camp Liberty, in Tehran’s Hezar Takhtekhabi Hospital and returned him back to Gohardasht Prison in Karaj without receiving any medical treatment although he had to undergo surgery. Previously, he had time and again been deprived of medical treatment and surgery upon various excuses. Mr. Fouladvand has been condemned to 18 years in prison and 74 lashes on the charge of supporting the PMOI, insulting Khamenei, and participating in the 2009 uprising.

Political prisoner Alireza Golipour, 29, is in Ward 7 of Evin prison. He suffers of acute heart ailment and is in dire condition. Mr. Golipour’s condition has badly deteriorated after suffering months of detention and torture in solitary confinement and quarantine. He suffers of various illnesses, including back pain, acute heart ailment, and a large tumor in his lungs, and his condition has deteriorated in the recent weeks. He has lost eight kilograms in just the past month. Although even the prison physicians stress that he requires immediate treatment in the hospital, henchmen refuse to transfer him to the hospital.

Mr. Golipour, a communications student and an employee of Ministry of Communications that had been arrested during the uprising of 2009, was once again arrested in October 2012. To place more pressure on this political prisoner, regime’s henchmen transferred him to Ward 8 of Evin Prison where ordinary prisoners are kept.

Similarly, Mohammad Saeid Hossein-zadeh, a political prisoner in Ward 7 of Evin Prison is deprived of medical care despite his ailing condition. He was on a hunger strike in the recent weeks in protest to being deprived of medical treatment for his ailments, including cardiac rheumatism and breathing problems, his unjust sentence, fabrication of charges against him, and refusal to hand him his personal items that had been stolen by the henchmen. Mr. Hossein-zadeh was arrested on 15 October 2014 in a raid by regime’s intelligence agents and was taken to Ward A2 that is controlled by the torturers of IRGC intelligence. It is over 10 months now that he is being kept in Ward 7 of Evin Prison. He has been condemned to seven years in prison for allegations such as “assembly and collaboration against the system” and insulting Khamenei, the criminal leader of the velayat-e faqih system.

Systematically depriving political prisoners of medical treatment under whatever pretext is a case of crime against humanity and a blatant violation of many international laws and conventions whose perpetrators must face justice and due punishment for their crimes against humanity.

Secretariat of the National Council of Resistance of Iran
December 2, 2015