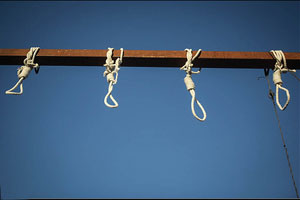 The clerical regime in Iran refused to halt its cycle of atrocities and executions even during Christmas. The regime henchmen hanged at least seven prisoners in the Adelabad Prison in Shiraz at dawn on Christmas day.

On December 18 and 14, ten other prisoners were secretly hanged in same prison that it is known for being one with most appalling condition.

Likewise, on Christmas Eve (December 24), two other prisoners were transferred to solitary confinements in the quarantine section of Zahedan’s central prison to await their execution.

In a message on Wednesday, December 25, Mrs. Maryam Rajavi, President-elect of the Iranian Resistance, congratulated the Christian compatriots on the occasion of Christmas and the New Year and wished them a year full of peace, liberty, tolerance and prosperity.

Rajavi called the clerical regime masking itself by Islam as the most ruthless enemy of Christ and Mohammad and added: In the name of religion they splash acid on the eyes of women, hang the youth, imprison the newly Christian converts, and violate their most rudimentary rights. They are henchmen that execute and torture people for their religious beliefs, especially for following the true message of Mohammad and Christ, and impose the worst discriminations and atrocities. They have set up a bloodthirsty religious tyranny that is the epicenter of fundamentalism and terrorism under the banner of Islam and the Godfather of all villains in the Middle East that today kill the innocent captives and hostages and force Christians and believers of other faiths to migrate and become homeless.

Previous article
Over 7,000 Iranian Revolutionary Guards in Iraq to compensate for Maliki’s ouster not to fight ISIS
Next article
Iranian Resistance welcomes Arms Trade Treaty, calls for halt of arms transfer to mullahs