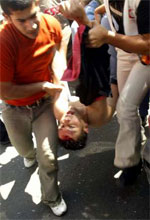 The Iranian Resistance’s President-elect, Mrs. Maryam Rajavi, offered her condolences to the bereaved family of a 23-year-old young man who was tragically shot and killed by the Revolutionary Guards. She called on the international community to condemn this anti-human and anti-Islamic crime by the mullahs’ regime.

The state-run daily Hamshahri wrote that 23-year-old Seyyed Mostafa was shot and killed by the State Security Forces in Tehran’s Delgosha Street on Friday for not observing a fast during the holy month of Ramadan.

The man had been stopped by agents from Tehran’s 132nd Precinct. As he left his car, one of the Guards shot him nine times at point blank. He died the next day in hospital because of his wounds.

Mrs. Rajavi underscored that the mullahs are peddlers of religion who murder women and young men on bogus charges in the streets or sentence them to stoning, cruel punishments and flog them in public. They are the worst enemies of Islam, she said.

The Iranian Resistance’s President-elect called on the international community to end its inaction vis-à-vis these inhuman atrocities. She said that Western countries’ policy of appeasement, in particular "human rights dialogue" with the henchmen ruling Iran, had contributed to the deterioration in the situation of human rights in Iran and given them freer rein to suppress the Iranian people. Mrs. Rajavi called for a halt to this dialogue and urged Europe to make further ties with Tehran conditional on improvement in the situation of human rights in Iran.

Secretariat of the National Council of Resistance of Iran
October 18, 2005

Previous articleIran-Iraq: Panel of experts in U.S. capital condemns Iran meddling in Iraq
Next articleIran: Judiciary sentences a women to stoning, another to death by hanging