Iran: Judiciary sentences a women to stoning, another to death by hanging 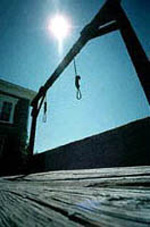 In a bid to terrorize and intimidate the public and step up general suppression, particularly against women, the mullahs’ misogynous regime has again resorted to issuing stoning verdicts.

Some time ago, Abbas Alizadeh, then-Head of Tehran Province’s Justice Department told the Iranian state television, "We hand out harsh sentences in our courts. The province’s criminal court issues verdicts that are very heavy. You might ask why we do not make these public. We have some political, social and international considerations, which prevent us from making those definite and heavy sentences."

Earlier, reacting to the widespread wave of international protests and outrage after the Iranian Resistance revealed a video tape of stonings in Iran the mullahs’ judiciary refrained from making those verdicts public and insisted that those sentences be carried out in secret.

Ms. Sarvnaz Chitsaz, Chairwoman of the NCRI’s Women’s Committee, said, "It appears that with the presidency of Ahmadinejad, the medieval dictatorship ruling Iran, faced with widespread discontent, uprisings and protests by different sectors of society, has abandoned these considerations and pretenses and resorted to blatant suppression of Iranian women."

Ms. Chitsaz urged international human rights and women’s rights organizations to voice protest against these criminal verdicts and called for urgent action by the United Nations to prevent the issuing and implementation of such inhumane verdicts.

The NCRI’s Women’s Committee draws the attention of the international community to stoning and death sentences against women who are themselves victims of the regime and calls for urgent action to save the lives of women who are awaiting the implementation of stoning verdicts or death sentences.

Women’s Committee of the National Council of Resistance of Iran
October 19, 2005