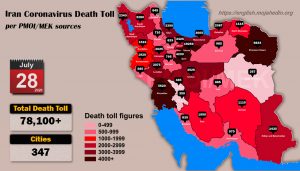 According to the Health Ministry, 26 provinces, including 92% of the country’s population, are in the state of red or on alert

A spokesperson for the regime’s Health Ministry said in its state-controlled statistics that the number of Coronavirus victims in the past 24 hours was 235, and the number of patients in ICUs was 3,902. Both figures are unprecedented since the onset of Coronavirus last winter. Speaking to IRNA today, for the first time, she acknowledged that 15 provinces, including Tehran, are red. Other red provinces are Mazandaran, Golestan, Fars, East Azerbaijan, Ardabil, Isfahan, Alborz, Ilam, Khorasan Razavi, Kerman, North Khorasan, Semnan, Lorestan, and Hormozgan. She added, “The provinces of West Azerbaijan, Khuzestan, Bushehr, Chaharmahal and Bakhtiari, Zanjan, Hamedan, Kohgiluyeh and Boyer-Ahmad, Central, Yazd, Gilan, and Qom are also on alert.”

Alireza Zali, the head of the NCCT in Tehran, told IRNA, yesterday, “Due to the extension of the restrictions imposed in Tehran, holding any public gatherings, reunions, and exhibitions in Tehran is prohibited … Naturally, 684 new patients in Tehran hospitals in just 24 hours is a significant number that can affect the resilience of human resources and medical capacities, 17% of which are being treated in ICU wards.”

In Khorasan Razavi, Ali-Asghar Anabestani, a regime Parliament deputy told the Parliament’s website, today, “The government dropped the management of the Coronavirus to improve the country’s economic situation and somehow sold people’s lives to their pockets. In recent days, while we are witnessing an increase in cases of Coronavirus in Khorasan Razavi Province, there is no sense of responsibility in the executive branch… The number of Coronavirus deaths in my constituency has reached five per day, which is much higher than the country’s and the world’s average. The number of fatalities is seriously alarming for the country. ”

According to IRNA, the head of the University of Medical Sciences in Ardabil said yesterday, “The daily visits to hospitals and health centers have exceeded 1,000. According to the health managers of Ardabil, this Province is in a critical situation in terms of the prevalence of Coronavirus, and the four cities of Ardabil, Meshginshahr, Parsabad, and Nir are red.” In another development, the governor of Ardabil told ISNA, yesterday, “Any transfer and exchange of cash in Ardabil Province is prohibited in order to prevent the spread of the virus.”

As objections over Rouhani’s remarks about holding Muharram mourning ceremonies and neglecting the terrible virus spread, cleric Ahmad Marvi, the Custodian of Astan-e Quds Razavi, told Mizan news agency yesterday, “What we can infer from the Supreme Leader’s instructions is that mourning ceremonies should not be canceled.” According to Khabar Fori telegram, another cleric, Alireza Arafi, the “director of seminaries,” said that Khamenei “emphasized keeping this torch (mourning) lit.”

The state-run daily, Mostaghel wrote today, “When Mr. Rouhani orders large-scale rallies in Muharram and on the other hand blames weddings and mourning for the spread of the Coronavirus, it really induces a sense of living in a circus for the citizens, or rather in an Orwellian animal farm. People are clueless, facing carefree authorities! They feel that they have been deliberately left to be killed.”

Mrs. Rajavi calls on the United Nations to condemn this crime and to visit Iranian prisons Earlier this morning, in yet another heinous crime, the...
Read more
Statements

· Health Ministry: Currently, 170 cities are red, and 101 cities are in alert. No city is virus-free, and all parts of the country...
Read more
Search