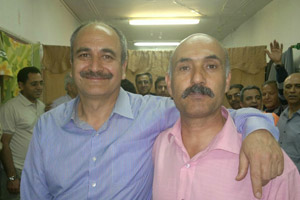 NCRI – Following the suspicious death of political prisoner Mr. Shahrokh Zamani, in the evening of September 13, the regime’s intelligence agents, judiciary henchmen and elements stationed in that prison, and the torturers raided Hall 12, Ward 4 of Gohardasht (Rajai Shahr) prison to terrorize and pressure the political prisoners. However, the prisoners gathered in front of the ward and prevented these elements from entering and exchanged angry words with them.

The steadfast political prisoner Shahrokh Zamani suspiciously lost his life on Sunday, September 13, while imprisoned by the Iranian regime’s henchmen. His cellmates in Hall 12 of Ward 4 found his body in his bed with his mouth full of blood and his head bruised.

Mr. Shahrokh Zamani was arrested in June 2011 for his active role in the protests and labor strikes in Tabriz. He was transferred to Ghezel-Hessar in March 2013 and a month later was moved to Gohardasht Prison.

A week ago, he sent a message to laborers calling on them to stage protests to attain their rights and to act in organized tandem with the movements by teachers, nurses and other classes of the fed up Iranian society.

Mrs. Maryam Rajavi, President-elect of the Iranian Resistance, offered her condolences to the family of Mr. Shahrokh Zamani, to the heroic people of Iranian Azerbaijan, and Iranian workers. She urged the international community to condemn the inhumane conditions in Iran’s prisons and to convene an international mission to investigate the suspicious deaths of the political prisoners in Iran.

Secretariat of the National Council of Resistance of Iran
September 13, 2015