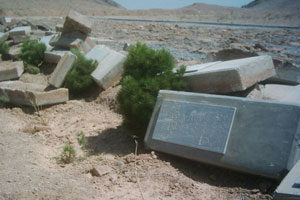 NCRI – The Iranian Resistance strongly condemns the anti-human and despicable act of destroying the Baha’i cemetery in Shiraz by the revolutionary guards and the suppressive forces and calls on the international community to firmly condemn this act and adopt urgent action to stop this fascist step that has been condemned by all religions and cultures and is a violation of many international laws and conventions.

In this historic cemetery, 950 members of the Baha’i community have been buried that includes ten women who were executed by the mullahs’ regime in June 1983.

This heinous act is part of the trend of intensifying suppression and violation of human rights in Iran that since Rouhani’s Presidency has taken on an unprecedented scale with over 700 executions in this time span.

Secretariat of the National Council of Resistance of Iran
May 4, 2014