NCRI – Concerned over the call by  the Iranian Resistance and People’s Mojahedin Organization of Iran (PMOI) for a nationwide celebration of the Festival of Fire as a symbol of rejecting the ruling theocracy, the clerical regime had put on alert all its suppressive agencies and issued many directives since a month ago in order to thwart the people from rising up during the celebrations. It also mobilized the State Security Forces (SSF), the paramilitary Bassij, the Revolutionary Guards, and plain clothed agents to crackdown on the citizens.

Nevertheless, millions of Iranian youths marked the Chaharshanbeh Souri celebrations, turning it into a nationwide expression of protest against the ruling dictatorship.

In order to prevent gatherings, the SSF Commander in Tehran had mobilized hundreds of motorcycle units across Tehran as patrol teams, which arrested a large number of citizens.  Moreover, fearing the spread of protests and in order to contain them, beginning Tuesday, strict traffic rules were enforced and the use of motorcycles was banned outright.

“We don’t want to let anything happen on Chaharshanbeh Souri this year,” Tehran’s Governor said last week in a meeting with SSF commanders in the capital and officials from different offices of the local government, emphasizing, “The festivities should be even less that last year.  Each organ must confront elements involved in the festivities within the framework of jurisdiction.”  He told the SSF commander to employ full force to stem any protest in Tehran. 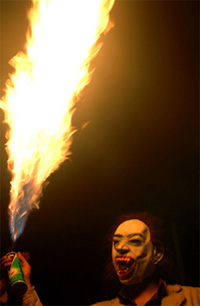 The regime setup checkpoints in most Tehran streets and held field courts in different parts of the capital, declaring that anyone caught hurling a firecracker would be sentenced from six months to a year imprisonment.

The Director General of the Ministry of Education ordered schools closed earlier than normal hours on Tuesday so as to prevent the students from going to the streets.  The Bassij and SSF forces in Tehran raided different high schools and conducted body searches.

The Intelligence Ministry in the southwestern city of Ahwaz issued directives, ordering all public places and restaurants shut on Tuesday from 2:00 pm.  It also enforced a curfew in the city’s Kianpars district from 6:00 pm Tuesday until 1:00 am Wednesday morning.  More that 1000 security agents took positions in different parts of the city on Tuesday.

News from Kurdish cities including Piranshahr, Sardasht, Bookan, Sanandaj, and Mahabad indicated that a de facto martial law was in place as suppressive forces were stationed at crowded intersection and locations to prevent the outbreak of any protests.

In Khorramabad (western Iran), the Intelligence Ministry ordered the Telecommunication department’s staff to monitor all phone calls especially calls to and from overseas. 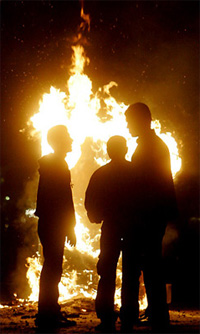 Since last week, state-run television networks, broadcast many programs warning of the dangers and perils of firecrackers.  While interviewing SSF Commanders, the stations warned against celebration of any kind.

Nevertheless, people all over the country displayed the depth of their indignation and hatred toward the regime from the early hours of Tuesday, by hurling firecrackers and setting fire to pictures of Khomeini, Supreme Leader Ali Khamenei and Mahmoud Ahmadinejad.

Many cities turned into war zones and explosions could be heard everywhere.  The youth clashed with the regime’s forces in the main squares and central locations and chanted anti-government slogans.

Many parts of Tehran including Shahrak-e-gharb, Tehran-Pars, Aryashahr, and Mohseni Square, as well as Shariati, Mirdamad and Geisha streets fell under the control of the people.  The youth, chanting, "in Iran, cry is freedom," clashed with security forces and set fire to a number of their vehicles.

In Shariati Street, suppressive forces attacked the young people, but were beaten back by angry protesters.  In Mirdamad Street, young activists set fire to pictures of Khomeini and Khamenei.

In Mohseni Square, hundreds of youths clashed with security forces and anti-riot units equipped with batons, helmets, and shields, neutralizing their attempt to breakdown the festivities. 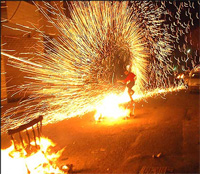 In Geisha neighborhood, thousands of people, including youths, gathered in the main street and the sound of firecrackers continued throughout the night.  Young people started big fires in many parts of the city.  Despite the presence of the security forces and plain-clothed agents, the people resisted and hurled firecrackers at them even from their balconies and roof tops.

In other parts of Tehran like Khak-Sefid and Tehran-pars, young people neutralized government forces’ attacks and set fire to their gathering centers.

In Karaj, (west of Tehran) young people took to the streets and started fires.  Firecrackers were heard everywhere.

In Qom (south of Tehran), despite the presence of suppressive forces and intense traffic controls, the, youths used hit-and-run tactics and started fires in the streets and set fire to trash bins.

In Mashad (northeast Iran), despite extensive control of firecracker outlets, youths ignored widespread arrests and staged protests and celebrated throughout the city for several hours. 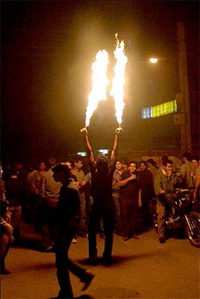 In Abadan (southwest Iran), young people started fires all over the city and threw firecrackers.  They also set fire on Khomeini and Khamenei’s pictures and threw them in trash bins.  The extensive presence of the security forces in cars, motorbikes or on foot did not stop the youths from celebrating.

In Shiraz (southern Iran), youths celebrated in many central streets of the city with firecrackers.  While the security forces roamed the streets, the sound of firecrackers could be heard anywhere.
In the northern city of Rasht, SSF and Bassij forces attacked gatherings by youths but encountered resistance.  The clashes were so intense that the security forces’ commanders on the scene were pleading with them to leave the streets.

In Mahabad (western Iran), stores and schools were closed and despite the heavy presence of security forces, the youths, gathered in different parts of the city to set fires and hurl firecrackers.

In Garmsar (central Iran), high school students closed down classes and took down pictures of Khamenei.  Students at the city’s Technical College defied the officials and closed down the college.

The nationwide protests yesterday by millions of Iranians reflect the explosive state of Iranian society and the inevitable fall of the medieval ruling regime.  Now is the time for the world community to abandon appeasement and side with millions of Iranians and their quest for democratic change.

Secretariat of the National Council of Resistance of Iran
March 15, 2006