Iran:Political prisoner, Sattar Beheshti, a brave blogger, killed under the torture of the mullahs’ regime henchmen 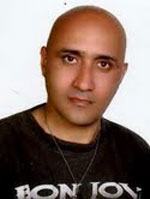 Political prisoner, Sattar Beheshti, 35, was killed eight days after his arrest under the torture of the mullahs’ regime henchmen. On Tuesday October 30th at noon, agents of the mullahs’ Ministry of Intelligence (MOIS) under the name of Internet Control Police, raided his home, arrested him and took him to an undisclosed location. He was a detainee of the student uprising of 1999 and after his release, because of his anti-regime stance, has been hated by the religious fascism ruling Iran.

Torturers put him under the most severe tortures in order to obtain forced confession such that witnesses said his body was “crushed” due to torture marks. While torture marks were clearly evident on all of Sattar’s body, the regime’s henchmen mentioned illness as the cause of his death, who according to his relatives was quite healthy.

Sattar Beheshti wrote in his blog before his arrest: “Yesterday they threatened me to tell my mother that soon she has to wear black (mourning) dress, you don’t shut your wide mouth … we do whatever we want ,,, you must shut up and should not inform otherwise you’d be strangled, anonymously! … day and night threatening phone calls do not stop … As an Iranian I say I can not remain silent in the face of all these miseries. I say that you talk too much and with these incredible nonsense, you have destroyed the country. I will not remain silent even if it is my death moment. Wherever I am in the world and whoever the threats come from, it is not important for me. Guys, close your mouths, do not oppress so we don’t reveal.
… Everyday arrests, torture, prison and mass executions are not mentioned. They put political prisoners in the worst situation to break them … they say we would arrest girls and family members. This is their slogan. We arrest, we torture … why don’t you come down of your rule? … Don’t arrest, don’t torture, don’t slaughter, then we will not inform. Otherwise not only we will inform, but also soon your oppressive system will fall on your head … We must know we are born once and we will depart once, so better to live in dignity and to die with pride.”

The Iranian resistance pays tribute to this political prisoner and expresses solidarity with his family, warns against the threats to life of political prisoners, who are imprisoned in the mullahs’ dungeons, and urges the referral of the appalling human rights violations dossier of the Iranian regime to the United Nations Security Council and trial of its blood-shedding leaders in international courts for crimes against humanity.

Secretariat of the National Council of Resistance of Iran
November 8, 2012