Prices of Bread, a Staple Food Item for Majority of Iranians, See a Staggering Rise; Inflation and Shortage of Flour in Iranian Cities; Closure of Many Bakeries 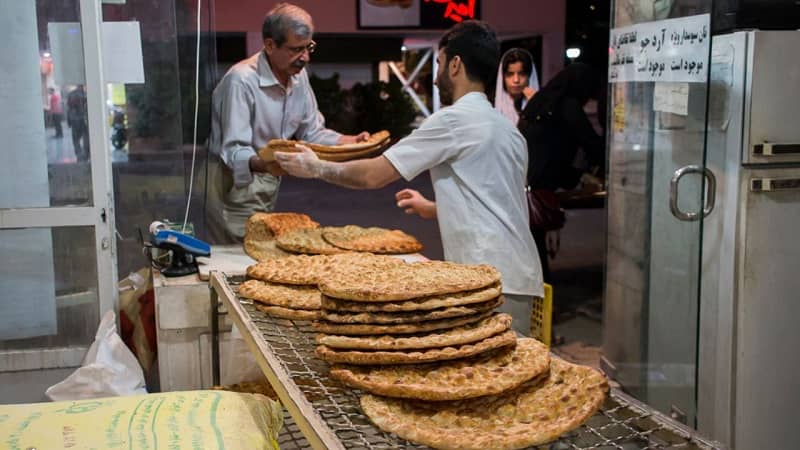 In recent weeks, the price of bread, a major food staple for the overwhelming majority of the Iranian people, has jumped 30% to 100% in most cities, triggering a crisis in the lives of workers and wage earners. At the same time, due to the rampant jump in the price of flour in the open market, which is controlled by the Islamic Revolutionary Guard Corps (IRGC) and the regime’s mafia factions, many bakeries have been forced to close their doors while others are faced with long lines by customers. These include bakeries in Tehran, Eastern Azerbaijan, Western Azerbaijan, Khorasan Razavi, Alborz, and Kurdistan.

The head of the Bakers’ Association in Mashhad said on October 18: “Starting ten days ago, the price of flour suddenly jumped in the open market after the guaranteed purchases of wheat were announced, dealing a shock to the market. Our bakers used to compensate for the shortage of flour supply by going to the open market. The official price for every bag of flour was 50,000 Tomans, but today it has reached 180,000 to 200,000 Tomans. … The prices of all ingredients associated with bread have increased, and about 12,000 bakeries have shut down operations in recent days” (state-run Hamshahri, October 18, 2020).

In Tehran, Mohammad Javad Karami, the head of the Association and Cooperatives of Thick Bread, said: “Unfortunately, every single necessary ingredient except flour has seen a rise in prices, to the extent that the final product has become 30% to 100% more expensive” (Tehran chamber of guilds official website, October 11, 2020).

In Karaj, a number of bakeries have closed their doors since Friday, October 16.

In Tabriz, the price of bread has increased anywhere between 30% to 50% in less than a week. A number of bakeries have suspended operations due to the increase in flour prices.

In Urmia, people have formed long queues in front of bakeries. Bakeries say that government-subsidized flour supplies are low, and flour prices in the open market have increased, leading to a spike in bread prices.

In Tonekabon, bakeries deal with meager flour supplies, leading many of them to close down.

On Friday, October 16, baking bread was stopped in the town of Neka and some other cities in northern Iran due to a hike in non-subsidized flour prices. A bakery owner in Neka said: Until now, we used to purchase flour in the open market. Today, the price of a bag of flour has increased from 90,000 to about 200,000 to 300,000 Tomans. This is while Neka’s population is primarily comprised of workers, and they are mostly only able to buy bread to feed their families.

In its propaganda, the clerical regime is trying to insinuate that the increase in bread prices and shortages of flour supplies are tied to sanctions. In recent months, the regime’s president Hassan Rouhani has repeatedly said that the regime has no challenges in producing wheat or importing it. The main culprit for bread shortages and price hikes is the hoarding, theft, and selling of flour in the open market at several-times the real price. This cycle is entirely dominated by the IRGC and various factions within the regime.

Secretariat of the National Council of Resistance of Iran (NCRI)
October 20, 2020

Previous articleIran News in Brief – October 21, 2020
Next articleIran: Strike by Parsian Oil & Gas Workers in Lamerd and Mahshahr; Protest by Retirees of the National Oil Company in Ahvaz and Isfahan

The spokesperson for the regime's Health Ministry: The average Coronavirus death rate in Iran has reached 40 people per million last week. The...
Read more
Statements

Khamenei, Rouhani, Zarif and Alavi must face justice for four decades of terrorism. A necessary and deterrent measure against godfather of international terrorism. The...
Read more