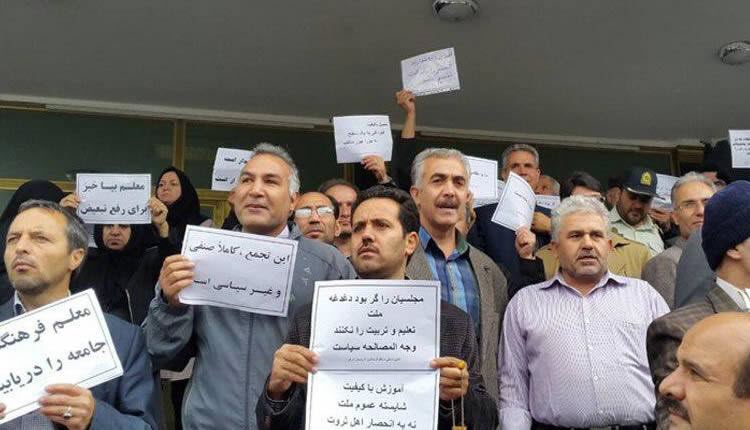 On Thursday and Friday, March 15th and 16th, in addition to thousands of farmers and people in Isfahan, protest of workers and fed up people from all strata and groups in different cities of the country continued:

1. The Ahwaz steel workers gathered in front of the regime’s governorate for the forty-fifth consecutive day and marched on the streets of the city. They chanted: We are workers, not slaves; we want our salaries, not promises.

2. Workers, contractors and sellers of construction materials of the recreational complex belonging to the regime’s Ministry of Defense in Anzali, whose claims have not been paid over the past two years, staged a protest gathering. They had a banner which wrote: we are ashamed before our families on the verge of New Year, but you are having fun!

3. More than 300 nongovernmental school teachers in Yazd gathered in the city’s Teacher Hall to protest the failure to pay their salaries for six months. One of their placards read: “Teachers rise up to eliminate discrimination”
4. Kerman Municipal Service workers gathered in front of the Kerman City Council in protest of failure to pay their salaries for four months.

5. Proprietors in the Adineh commercial center in Rasht rallied outside the home of Khamenei’s representative, mullah Zeynolabedin Qorbani, who is a major swindler and a cohort of the mullahs’ corrupt and usurping leader Khamenei.
Protesters chanted: “Shame on you Qorbani. Look at all the people here.” By pre-selling of the comercial units in this complex in year 2009, mullah Ghorbani had earned a huge wealth. In response to protests by the people who have not been delivered their units after buying them 9 years ago, he revealed in the Friday prayer on March7 that this commercial unit is based on the people’s endowment of property and all its affairs are related to Khamenei. In defense of what he had plundered, he said: “Ehsan Bakhsh (former Friday Imam of Rasht) built the Golsar complex to serve the clergy, and we built the Adineh complex … all of it under the leadership.”

6. Young job seekers from the Azadegan and Hoveyze as well as the trainees at West Karoon Susangerd Oil Company gathered in the mosque of Imam Ali in protest of unemployment and demanded recruitment.

7. Municipal Service and Landscape workers in Nazarbad of Karaj gathered in protest at nonpayment of their salaries for seven months.

8. Workers and employees of the Borujerd municipality gathered in front of the municipality in protest of not paying their salaries for eight months.

9. Hafez Tile Factory workers gathered outside the Industry and Mine Administration in Shiraz in protest against nonpayment of their delayed claims. They hung a worker in a symbolic show and chanted: “How many billions you got to sell the workers?”

10. Workers from the North East Railway Travers Company gathered in front of Semnan governorate in protest against the failure to pay their salaries for three months, their premium for six months, their New Year bonus and reward.

11. Iranian metallurgical powder workers in Ghazvin gathered in front of the governorate for the second day in protest against the failure to receive their salaries for six months. One of the placards they carried read: “How long should we be ashamed before our families?”

Secretariat of the National Council of Resistance of Iran
March 16, 2018

Previous article
Iran Regime Should Be Held to Account for Human Rights Abuses in Syria
Next article
On Nowruz, the Iranian New Year Bi-Partisan Members of Congress support a free Iran at Capitol Hill event