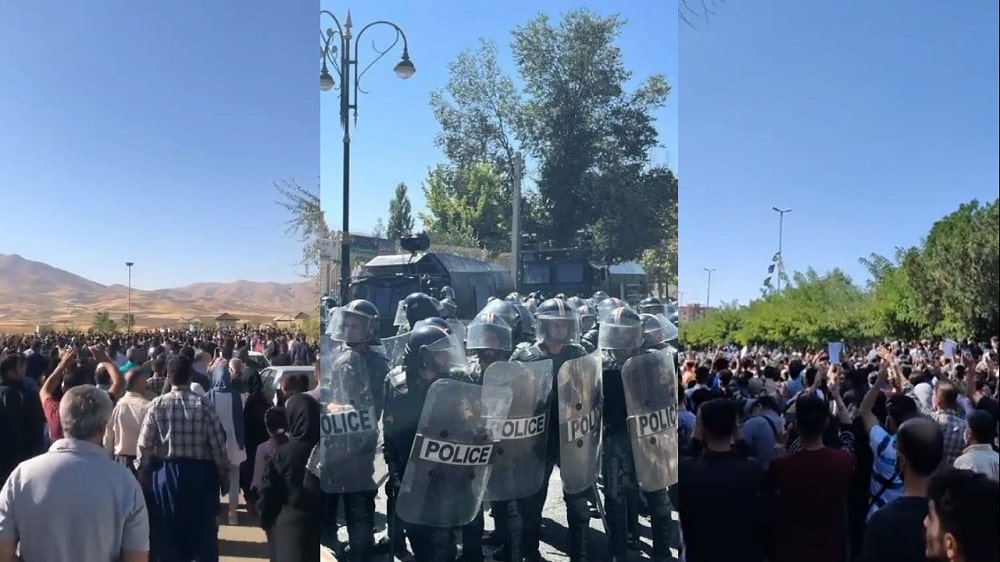 Chant “Death to Khamenei, I Will Kill Whoever Killed My Sister”

The Iranian people were outraged and furious over the painful murder of Mahsa Amini by the repressive so-called ‘Ershad (guidance) Patrol. Enraged residents of Tehran staged a protest rally outside Kasra Hospital, where Mahsa passed away. Demonstrators chanted: “Death to the dictator”, “Death to Khamenei”, “We are all Mahsa”, “Fight and we will fight back”, “From Kurdistan to Tehran, oppression against women”, “We will not accept humiliation”, “Death to the oppressor”, “Guidance Patrol (is) Killing Patrol” and “Khamenei is murderer, his rule is illegitimate”. While chanting “Death to Khamenei”, the protesters with repressive agents, who were trying to disperse them. Plainclothes agents arrested some of the demonstrators. Chanting “Vigilant Iranian, Support, Support”, demonstrators urged other people to join the protests.

Many people in Tehran honked their car horns to protest against the mullahs’ crime. On the rooftops in Tehran, people chanted “Death to the dictator”. A number of women blocked the streets and chanted slogans against suppressive forces. In some areas, people gathered and chanted, “I will kill whoever killed my sister”. Some people gathered around Argentina Square in Tehran and chanted, “Death to Khamenei”, and blocked Argentina Street heading to Alvand Street, where Kasra Hospital is located. The Presence of large groups of people caused heavy traffic in Argentina Square and Sa’ee Park.

Mrs. Maryam Rajavi, the President-elect of the National Council of Resistance of Iran (NCRI) offered her deepest sympathies to Mahsa Amini’s family yesterday and called for public mourning. She urged Iranian women to hold a nationwide protest against the mullahs’ misogynous and evil regime and said called for the dismantling of Ershad Patrol. She added that more and more people are victimized by the mullahs’ misogynist regime every day and that with their resistance, Iranian women will overcome the oppression of the mullahs and IRGC. This regime must be confronted with all of our might, she said.