Gatherings and Protests in Iran Cities 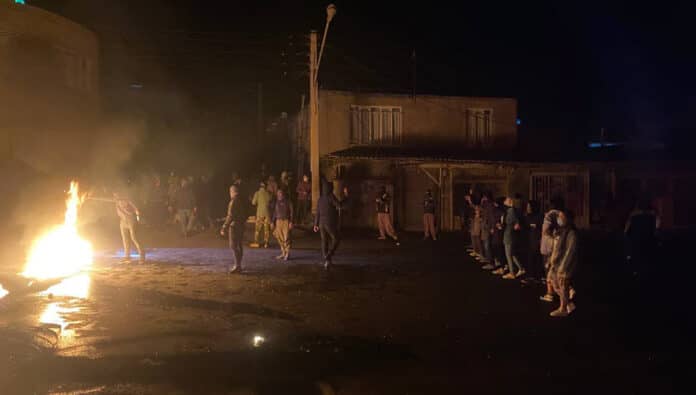 On Sunday night, November 20, 2022, the 66th night of the uprising, the people of Mahabad continued to resist repressive forces with a large presence in the streets. On Sunday night, the sound of shootings could be heard from different parts of Mahabad. People in other cities demonstrated in support of Mahabad by lighting fires and setting up barricades in the streets in some cities. During the past two nights, the IRGC had a large presence in Bukan and Mahabad, and the sound of shootings could be heard in different parts of these cities.

November 20 – Isfahan, central #Iran
Local activists are reporting gunfire and explosion(s) on this 66th night of the nationwide uprising.#IranRevolution2022#مرگ_بر_ستمگر_چه_شاه_باشه_چه_رهبر pic.twitter.com/F6KqnFGysa

In Piranshahr, people gathered outside the city hospital to prevent the abduction of the body of the 16-year-old Qader Shokri, murdered by the regime forces, and chanted, “Death to Khamenei.”

In Paveh, Marivan, and Javanrud, people staged night protests. The sound of shootings could also be heard from different parts of these cities.

In Tehran, youths held nightly demonstrations in different areas, including Abdol Abad, Haft Hoz, Chitgar, Ekbatan, Valiasr, Tehranpars, Shariati, and Ferdowsi Boulevard, chanting, “Death to the dictator” and “Death to Khamenei.” They also chanted in support of Mahabad, “Mahabad, Kurdistan are models for the whole of Iran,” and “From Mahabad to Tehran, I sacrifice my life for Iran.”

In Tehran, on the third day of the commemoration ceremony for Hamid Reza Rouhi’s martyrdom, people gathered and demonstrated in Behesht Zahra cemetery and chanted, “We swear to the blood of our comrades that we will continue to the end” and ” Kurdistan and Zahedan are Iran’s patriots.” Repressive forces attacked and beat participants of the ceremony and arrested some people.

State-run Asr-Iran website quoted Morad Elyaspour, Semirom governor, on November 20 as saying, “During the three days of unrest in Samirom, the police force and the IRGC requested auxiliary forces from the central headquarters. Rioters took the car of the Friday prayer, Imam, out of his office and set it on fire… Some people attacked the administrative buildings of Samirom, including the municipality, the seminary, the endowment department, and several banks, and caused a lot of damage to these sites, especially the municipality.

November 20 – Sardasht, western #Iran
More footage of locals continuing the nationwide protests against the regime on the 66th night of the uprising.#IranRevolution2022#سردشت pic.twitter.com/FqMoURtwaD