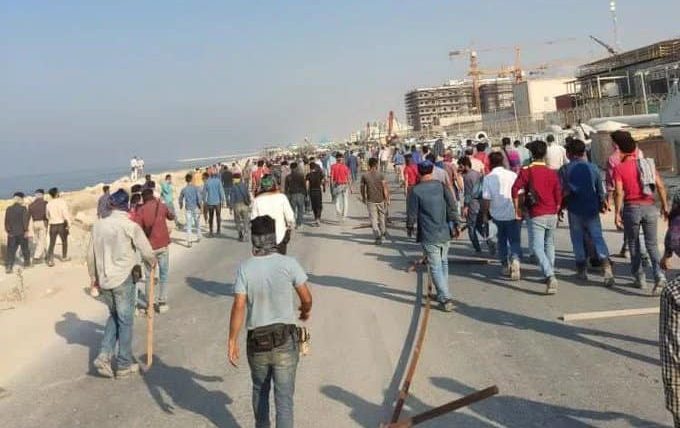 The workers blocked the path of the suppressive forces by lighting fires and piling rocks. The workers chanted, “Death to Khamenei”, “we will fight, we will die, we will take back Iran”, “death to the dictator”, “don’t call it a protest, it is now a revolution” and “this year, is a year of sacrifice, Seyyed Ali (Khamenei) will be overthrown”. The angry workers set fire to a security trailer and completely blocked the Petrochemical junction.

October 10 – Asaluyeh, southern #Iran
Additional footage of contract workers of a petrochemical site on strike.
Today marks the 25th day of the nationwide uprising against the regime.#IranRevolution2022#مهسا_امینی#نیکا_شاکرمی pic.twitter.com/W4CBGBrqB1

Last night, the suppressive forces brutally attacked people in Sanandaj who have actively participated in the nationwide uprising in the past three weeks. The sound of continuous shooting with various kinds of guns could be heard in different areas until this morning. In some areas, the suppressive forces staged house-to-house searches for protesters and arrested them violently while firing tear gas into the houses, which caused respiratory problems for a number of people.

The oppressed workers in Asaluyeh Petrochemical Complex stopped work, joined #IranProtests today, with chants of “Death to Khamenei.” All sectors of Iranian society are united in seeking FREEDOM &the overthrow of the religious dictatorship. #IranRevolution2022 will succeed! pic.twitter.com/g6Mn0m3VHY

Mrs. Maryam Rajavi, the President-elect of the National Council of Resistance of Iran, hailed the oppressed workers of Asaluyeh Petrochemical industry who stopped working today and joined the nationwide uprising of the Iranian people. She said, all segments of the Iranian people have joined in unison against the dictatorship and repression and cried out: “Freedom”. This is a revolution until victory.