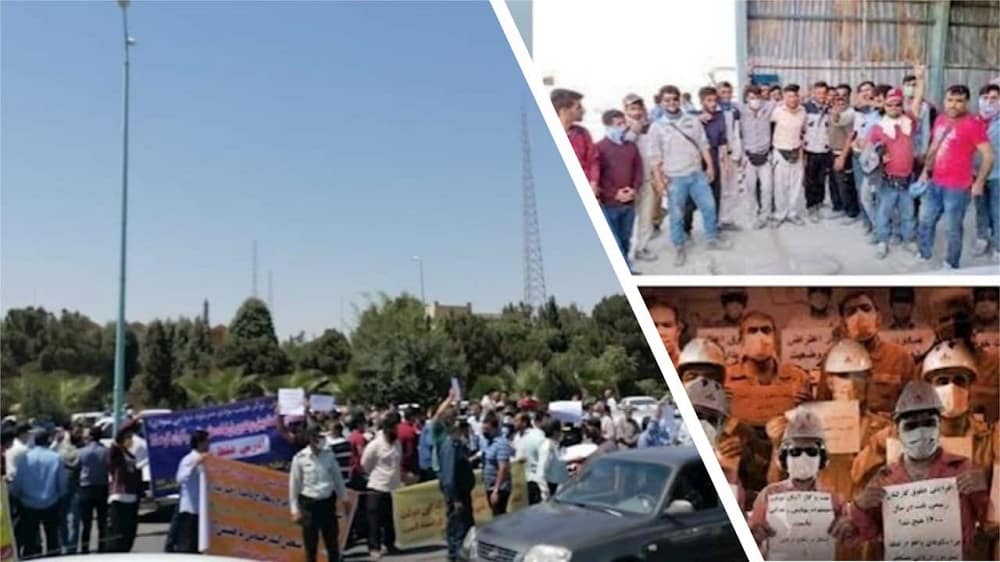 Mrs. Maryam Rajavi saluted the cattle ranchers and said: The tyrannical regime has suppressed all sectors of society, especially the workers and laborers. Plunderers, the ruling elite’s families, and the IRGC must be forced to meet the legitimate demands of the cattle ranchers. The only way to eliminate injustice, poverty, and high prices is to overthrow the clerical regime and establish a democratically elected republic.

On Sunday, June 27, 2021, cattle ranchers, workers, and various sectors of society and guilds gathered in various cities to protest the dire living conditions, inflation, and plundering policies of the clerical regime.

In Yazd, cattle ranchers dumped their cattle’s milk on the road in protest. At the gathering of cattle ranchers in Mashhad (northeast Iran), one of the protesters shouted: “… You (the state) is forcing us to offer the milk for 4,500 rials where a buttle of mineral water is sold for 5,000 rials! What can we do? Give me a cyanide pill to kill myself here. I am not afraid to die; I’ve had it. You’ve made life miserable for people. You’ve ruined our lives; God damn you. Is there anyone (in the state) that has the guts to answer us? We are losing our cattle because of you and for you to live your lives comfortably.”

At the same time, today social security retirees and pensioners in Tehran, Mashhad, Qazvin, and Shush, gathered in front of the social security offices; Retirees from the steel industry in Tehran, Isfahan, and Khuzestan gathered outside the Civil Servants Pension Organization, and IranAir (the Iranian national Airline) retirees in Tehran rallied outside the company headquarters to protest against low wages, unbearable living conditions, and their unanswered demands. The repressive State Security Force had queued up in front of the IranAir pensioners and prevented them from gathering outside the building.

Rallies and protests by ranchers, retirees, and pensioners take place as the nationwide strike of contract workers of oil and petrochemical industries continues for the ninth day in 19 cities, and more contract workers, including those of the Bushehr Saz-pa’d Petrochemical Company and Gamma company in Bandar Abbas also joined the national strike, today.

Mrs. Maryam Rajavi, the President-elect of the National Council of Resistance of Iran (NCRI), saluted the hardworking and protesting cattle ranchers in different cities of the country and said: The tyrannical regime has suppressed all sectors of society, especially the workers and laborers. Plunderers, the ruling elite’s families, and the IRGC must be forced to meet the legitimate demands of the cattle ranchers The only way to get rid of injustice, poverty, and high prices is to overthrow the clerical regime and establish a democratically elected republic, she said.

I salute the hard-working dairy farmers who have risen in various #Iran cities. The clerical regime’s oppression has overwhelmed all sectors of Iranian society, particularly the workers and farmers. #IranProtests