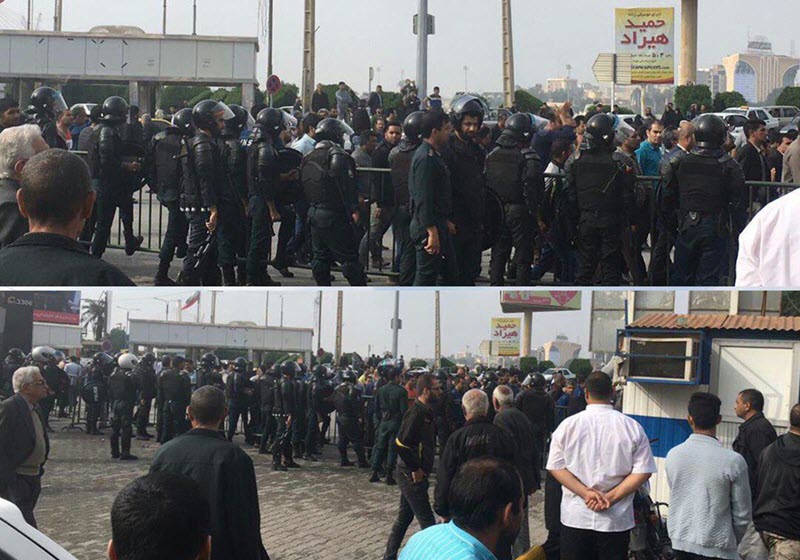 With the persistent strike and brave demonstrations of the workers of the Haft Tappeh sugarcane mill and Ahvaz Steel, Khamenei, on November 26 sent the henchman Sadegh Larijani, the head of the regime’s judiciary, to the scene, fearful of the continuation and spread of protests, to show off to and intimidate the workers To pay “We must deal with those who want to disrupt the order of the country, under the pretext of pursuing the demands of workers,” he said. … “Workers should not allow their demands to be an excuse for the use of enemies and to create disorder.”

At the same time, the repressive forces of the regime tried to prevent the continuation of the strike and demonstrations of workers, but despite the intensive presence of state security forces, anti-riot guards and plain clothes, steel workers continued their strike for the third week. Workers gathered in front of the regime’s governorate in Ahvaz, broke the blockade of repressive forces and rallied in the streets of Ahvaz. The workers chanted as they were accompanied by a group of Ahvazi youth: “We stand, we die, we get our rights; the worker dies; he does not accept humiliation; our enemy is here, they claim falsely that it is the United States; government, Mafia, happy marriage! “

At the same time, brave workers of the Haft Tappeh sugar cane mill continued their strike on the twenty-second day and rallied in the city of Shush. They chanted: “The worker dies; he does not accept humiliation; death to the oppressor, greetings to the worker; imprisoned worker must be freed; Steel, Haft Tappeh, unity, unity! “

Secretariat of the National Council of Resistance of Iran
November 26, 2018