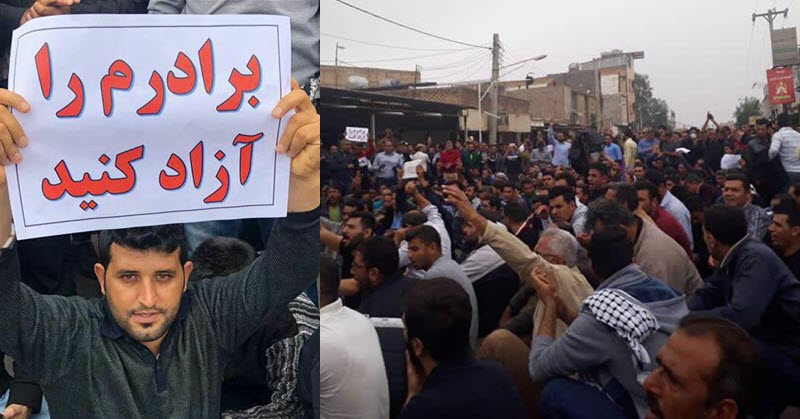 chanting: Imprisoned workers must be freed

Angry workers of the Haft Tappeh Sugarcane mill and the Ahvaz Steel factory rallied on Monday, November 19th, in protest at the arrest of a large number of sugar cane mill workers.

On their fifteenth day of strike, disregarding suppressive measures and the tight presence of repressive forces and riot police, Haft Tappeh workers rallied. People from various walks joined them on their path. The protesters chanted in front of the governorate: Imprisoned workers must be freed; Intimidation and imprisonment do not work anymore. Chanting slogans, the people called for the release of the workers in front of the regime’s court.

At the same time, Ahvaz Steel workers rallied in front of the provincial governorate in the second week of their strike in support of the Haft Tappeh workers and chanted: Haft Tappeh worker must be freed; We, the Steel workers, fight and fight against oppression and tyranny; No nation has ever seen such an injustice; O Fellow-citizens of Ahvaz, be aware, no one takes care of Ahvaz.

Due to escalation of protests in Shush and Ahvaz, the regime inevitably released a number of detainees on bail on Monday afternoon, but the workers reiterated that they would continue their strike and protest until all the arrested are released.

Secretariat of the National Council of Resistance of Iran
November 19, 2018

Previous articleIranian Regime: The End Is in Sight
Next articleIran Regime’s Zarif Is a Liar