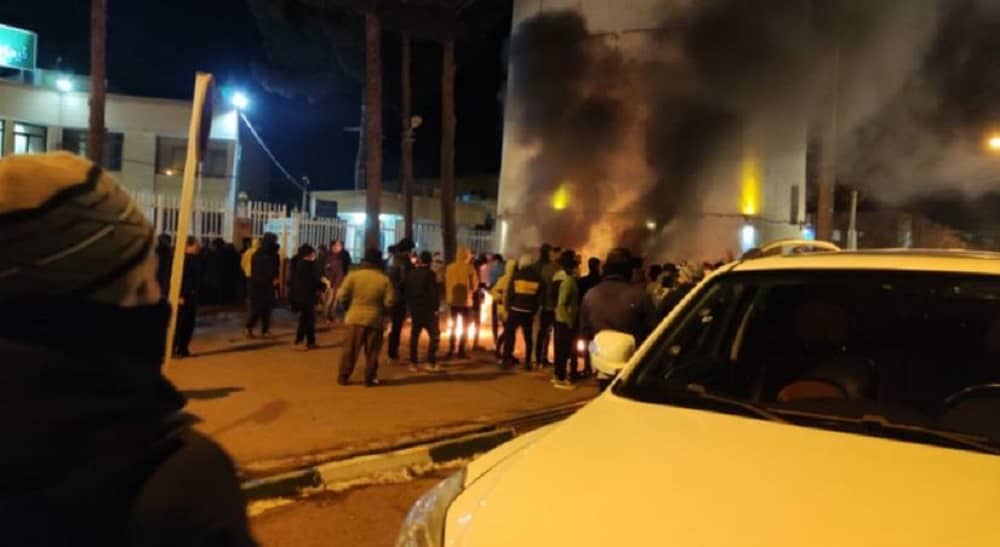 Memorial ceremony of a martyr in Sanandaj

On Monday, January 16, the 123rd day of the nationwide uprising, a large number of locals in Sanandaj participated in the 40th day of the martyrdom of Homan Abdullahi, a 21-year-old youth who was martyred on December 7 by IRGC agents’ direct fire. They chanted, “Death to Khamenei,” “Martyr does not die”, “No to monarchy, no to the Leader (Khamenei)! Democracy, equality” and “Kurdistan is a graveyard for fascists “.

Last night, the residents of Apadana and Shariati Street in Tehran chanted slogans of “Death to Khamenei, damned be Khomeini” and “Death to the Execution Republic”, and brave youths chanted anti-government slogans in Sharif University.

Since Monday morning, while there have been long queues to buy fuel in Torbat Jam and Taybad (Khorasan province), angry people attacked the governor’s office and Red Crescent building while chanting, “Death to Khamenei”. Courageous youths clashed with repressive forces while chanting, “Shameless, Shameless” and took control of some streets by lighting fires at night.

In a situation where the mullahs’ plundering policies have caused a fuel crisis and shutdown of most of the country, and more than 20 provinces of the country, including Tehran, have been officially shut down, Khamenei, in fear of the outbreak of the uprising, ordered the State Security Force and the IRGC to go on alert. Also, the regime’s foreign minister promised to send more oil and gas to his proxy mercenaries during his trip to Lebanon.

In another development, Baluchis in Golestan province demonstrated in front of Sunni cleric Mohammad Hossein Gargij’s house in Galikash on Sunday in his support while chanting “Allah Akbar” and demanded the cancellation of summoning him to the special court for clergies.

On Sunday morning, the brave girls of the Resistance Units in Karaj chanted slogans “Let the people of the world know, Massoud (Rajavi) is our leader”, “Death to the oppressor, be it the Shah or the Leader (Khamenei)”, “We can and must bring freedom”, “Poverty, corruption, and high prices; we march toward (the regime’s) overthrow”, “Death to the principle of Velayat al-Faqih, hail to Masoud Rajavi”, “Our answer to the executions is a fiery uprising”.

Mrs. Maryam Rajavi, the President-elect of the National Council of Resistance of Iran (NCRI), said that under the rule of the occupying mullahs, bleakness was added to drought, poverty, inflation, unemployment, disease, and corruption. With the second gas resources in the world and on an ocean of oil, the majority of Iranian people are deprived of minimum heating facilities, but the regime wants to delay its overthrow by giving oil to proxy terrorists. For Khamenei, the life and comfort of the people is of no importance. The only options are the overthrow of the regime and the establishment of democracy and the people’s sovereignty, which the rebellious youths are committed to.