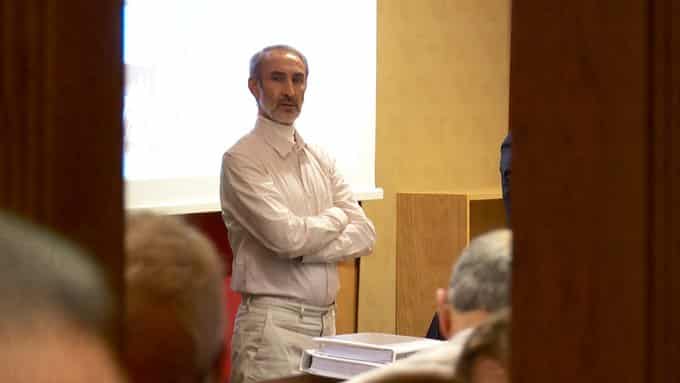 On Wednesday, January 11, the Iranian regime’s Foreign Ministry reportedly summoned the Swedish ambassador to hear a patchwork of complaints about tensions between Tehran and not only Sweden but the European Union in general. The summons came shortly after opening an appeal process in a Stockholm court involving the former Iranian prison official Hamid Noury.

Separately, though, the Foreign Ministry’s spokesman Nasser Kanaani sought to portray Sweden’s actions as inappropriate with respect to Noury’s initial sentence and subsequent appeal. At the time that Noury received his sentence of life in prison for war crimes and mass murder, Iran’s Foreign Ministry dismissed the case as “illegal and contrary to the principles of international law.” It offered little explanation for this assessment, while various independent reports on the case emphasized the fact that Noury had been arrested in 2019 on the basis of “universal jurisdiction,” which explicitly allows any nation’s judiciary to prosecute serious violations of international law if it is apparent that no such prosecution is forthcoming in the jurisdiction where the crimes took place.

Noury is now the first to face legal consequences for participating in the 1988 massacre of political prisoners, which is estimated to have claimed around 30,000 lives throughout the country. Most of the victims were supporters of Iran’s main opposition group, the People’s Mojahedin Organization of Iran (PMOI/MEK).

Noury’s crimes became evident following a months-long trial that heard testimony from dozens of the massacre’s survivors, virtually all of whom identified him as someone who had called prisoners before the “death commission” in Gohardasht Prison as well as led them to the gallows after those commissions ordered summary death sentences.

The regime’s authorities and state media have blatantly accused Sweden of violating Noury’s rights.  Noury’s complaints will undoubtedly come across as bitterly ironic to persons familiar with the regime’s judicial system and human rights record.

In addition to its unimaginable brutality in dealing with prisoners, the clerical regime is notorious for its systematic use of “white torture,” a practice whereby prisoners are held for months at a time in windowless cells under constant harsh lighting, with minimal stimulation or contact with the outside world. The regime is also notorious for denying prisoners medical treatment, often leading to permanent consequences or endangering their lives.

Public complaints from Noury may be intended to distract attention from such stories or give the impression of parity between Iran and Western nations in human rights matters. But such a strategy is practically doomed to fail, especially when the international community scrutinizes the regime’s crackdowns on the five-month anti-regime uprising that was sparked by the death of Mahsa Amini in September at the hands of Tehran’s “morality police.”

The European Union has passed three new sanctions packages targeting Iran over those crackdowns. Just this week, lawmakers from Germany and other EU member states were urging the preparation of a fourth. On Thursday, Italy’s Foreign Minister Antonio Tajani lamented that Tehran had ignored all appeals for curtailment of executions and a halt to violent attacks on peaceful protesters. Italian President Sergio Mattarella voiced that demand to the new Iranian regime’s ambassador in Rome a day earlier.

The regime’s so-called human rights monitor has explicitly argued that it is not incumbent upon the mullahs to adhere to international laws if they are at odds with the system’s medieval interpretation of Islam. That interpretation allows for, among other things, the execution of prisoners who are under the age of 18.

Although persons over that age were involved in each of the four known executions that are known to have been carried out on protesters since the current uprising began, gunfire and beatings have claimed the lives of at least 70 minors among more than 750 people of all ages. This is according to the intelligence network maintained inside Iran by the MEK, which has also determined that at least 30,000 people have been arrested in connection with the uprising.

This figure potentially recalls attention to the 1988 massacre and thus to Noury’s appeal, which is doomed to fail. “I think this trial once again will highlight what happened in Iran in 1988,” said Shahin Gobadi, a spokesman for the MEK’s parent coalition, the National Council of Resistance of Iran. Today, after four months of protests and a revolution in Iran, people have a much better understanding of the savagery of this regime.”

The Iranian Resistance has repeatedly urged Western authorities to take concrete measures beyond the aforementioned economic sanctions to hold the regime and its leading officials accountable for historical and ongoing human rights abuses and crimes against humanity. Western democracies should close embassies and eject the regime’s diplomat-terrorists, as well as open inquiries that could lead to charges at the International Criminal Court. While comparatively few lawmakers have endorsed those measures so far, growing numbers of them are highlighting the issues that may provide relevant justification.