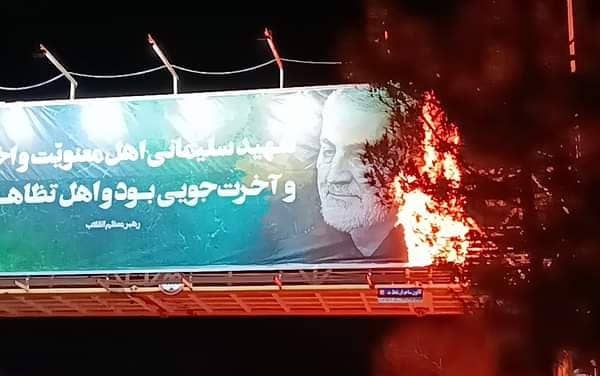 On Saturday evening, January 21, the 128th night of the nationwide uprising, defiant youths in Bandar Abbas held a nightly demonstration in the streets chanting “Death to the dictator” and “You (regime’s agents) are lewd, I am the liberated woman.” In Tehran Pars and townships of Bagheri and Ekbatan of Tehran, the slogans of “Death to the terrorist IRGC,” “We will fight, we will die, we will take Iran back,” “From Zahedan to Tehran, I will sacrifice my life for Iran,” “From Kurdistan to Tehran, I will sacrifice my life for Iran,” “This year, is a year of sacrifice, Seyyed Ali (Khamenei) will be overthrown,” “Death to the Supreme Leader after many long years of crimes” and “Death to Basiji” echoed from the buildings.

In Ardabil, the offices of the Judiciary were torched in the early hours of Saturday.  At 01:00 a.m. on Saturday, four members of the IRGC were killed or wounded in a clash with youths at the checkpoint near Nachit village of Bukan.

On Friday evening, people chanted anti-regime slogans in various parts of Tehran. In the Sattar Khan neighborhood, people chanted “Our homeland will not be freed as long as mullahs are there.” In Bandar Abbas, defiant youths chanted “Death to the dictator” in the streets.

On Friday morning, people participated in the 40th day of the martyrdom ceremony of Dr. Aida Rostami in Imamzade Abdullah cemetery of Gorgan, despite the brutal attack by plainclothes agents. The suppressive forces beat people and arrested some of the participants. Aida Rostami, a popular physician living in Tehran’s Ekbatan township, secretly helped the wounded during the uprising. She was identified and kidnapped by the regime’s agents and killed under torture on December 12.

On Friday, by blocking the roads leading to Behesht Reza cemetery in Mashhad, the suppressive agents prevented people from attending the burial site of martyr Majid Reza Rahnavard.

In a new wave of arrests of Baluchi teenagers and youths, many were arrested on January 21 in Be’sat, Shirabad and Karimabad districts.

Previous article
Widespread Campaign of Resistance Units on the Anniversary of Release of Last Group of Political Prisoners from Shah’s Prisons
Next article
Selling a Dead Horse: Reza Pahlavi’s Bid to Market a Trashed Dictatorship