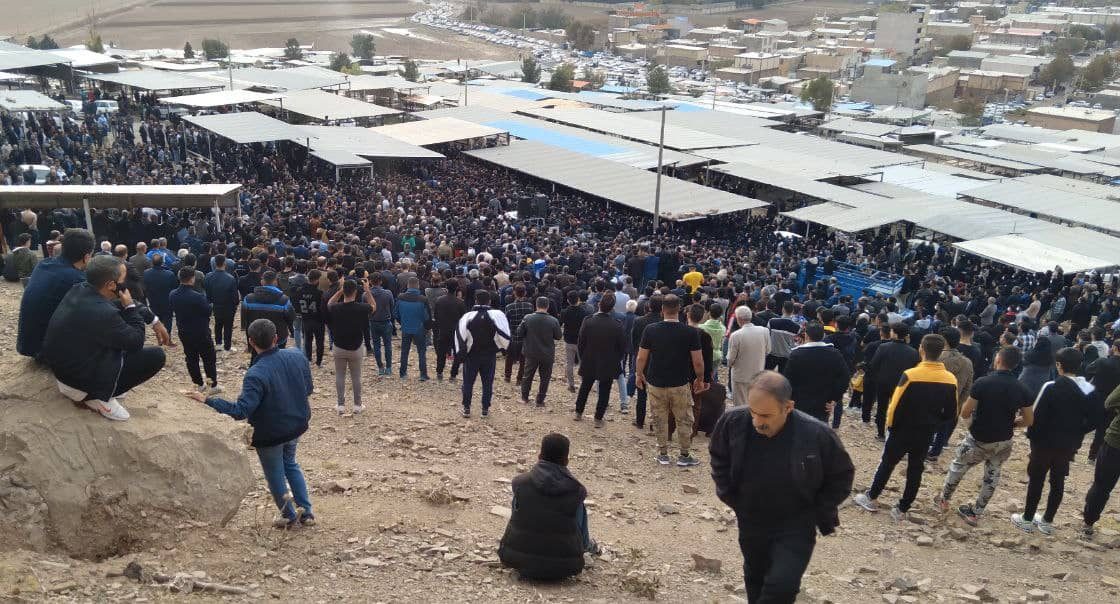 Protests in Tehran and other cities across the country

Tuesday night, November 22, marked the 68th night of the uprising in many areas of Tehran, such as Moshiriyeh, Geisha, Shahr-e Rey, Vanak, Niavaran, Shahrak-e Gharb, Ekhtiyarieh, Saadat Abad, etc. People staged their nightly protests by setting fire in the streets, chanting, “Death to Khamenei”, “Death to the Dictator”, “Death to the child-killing government”, “Death to the entirety of the system”, “Death to the principle of Velayat Faqih”, “This year is the year of sacrifice; Seyed Ali (Khamenei) will be overthrown”, “Bloodthirsty Khamenei, we will bury you”, “Freedom, freedom, freedom”, and “We haven’t sacrificed our best to appease the murderous [Khamenei]”.

In Moshiriyya, Ekbatan, and Ghaleh Hassan Khan, suppressive forces fired at protesters. Nevertheless, the people bravely put up stiff resistance, shouting, “Shame on you, Shame on you”, and intense clashes broke out between youths and the regime’s agents. In Golshahr and Fardis Karaj, people staged nightly protests and chanted, “Death to the dictator”. They blocked the roads by lighting fires.

People in Kurdish cities, including Sanandaj, Baneh, Mochesh of Kamiyaran, Javanrud, and Dehgolan, poured into the streets, lit fires, and chanted “Death to Khamenei” during their nightly protests and blocked the roads. In Javanrud, people clashed with security forces, who fired tear gas at them. In Mochesh, suppressive agents deployed armored vehicles and machine guns in the streets and fired at people.

In Sistan and Baluchistan, Baluch protesters in Zahedan’s various areas, including Shirabad, Karimabad, and Elkhebal Street, held their nightly protests in support of their Kurdish compatriots.

In Khuzestan, people staged their protest in Andimeshk by blocking the roads, lighting fire, and clashing with the regime’s forces who shot at them. In Dezful, people in the Saheli neighborhood staged their nightly protests.

Other cities, including Kermanshah, Urmia, Shahin Shahr, Salas Babajani, and Mehr city in Fars province, were scenes of protests. In some towns, skirmishes broke out between youths and security forces.

Defiant youths in Sabzevar and Sari set fire to a paramilitary Basij base. In Homayoonshahr and Tayyebad, a seminary and a large picture of Khomeini were put on fire, respectively. Courageous youths of Zahedan attacked an IRGC base with Molotov cocktails.

In Tehran, Mehr Shahr Karaj, Zahedan, and Isfahan students staged protests in the streets, chanting, “This year is the year of sacrifice; Seyed Ali (Khamenei) will be overthrown” and “Shame on our disgraced leader”.

November 23 – Dehdasht, southwest #Iran
Locals are continuing the nationwide protests against the regime on the 69th night of the uprising and confronting the regime's security forces.#IranRevolution2022#مرگ_بر_ستمگر_چه_شاه_باشه_چه_رهبرpic.twitter.com/wqCJHZInvU