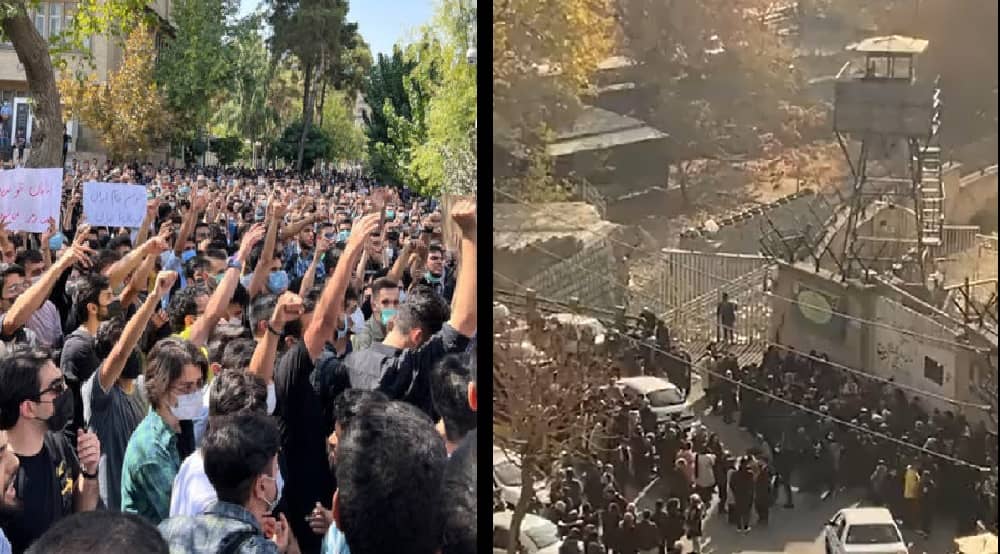 Merchants’ strikes in different cities, night protests, burial processions in Tehran, and other cities, chanting “Death to Khamenei,” “Pledge to our fallen comrades, we remain steadfast to the end.”

On Thursday night, November 25, marking the 70th day of the uprising, people converged in the streets of Tehran in various areas, including Vali-e Asr, City Theater, Tehranpars, Moshiriyeh, Tajrish, Narmak, Coca-Cola, Piroozi St., Shemiran Nou, Sattarkhan, Punak, Ekbatan, Chitgar, etc. Protesters were chanting, “Death to Khamenei,” “Death to the dictator,” “Death to the entirety of the regime,” “Poverty, corruption, and high cost of living; We shall carry on until the overthrow of the regime,” “This year is the year of sacrifice; Seyyed Ali (Khamenei) will be overthrown” and “From Kurdistan to Tehran, I sacrifice my life for Iran.” The protesters in Chitgar chanted, “Our money is spent in Lebanon; our youth languish in jails.” To terrorize people, paramilitary Basij forces and plainclothes agents vandalized people’s cars and began shooting indiscriminately at houses in various areas of Tehran.

People in areas such as Moshiriyeh put up stiff resistance against the suppressive forces, and clashes broke out. In Kashani and Hakim Highway, large state-installed banners were burnt. Sepah Sq. (an icon of the IRGC) in Pakdasht of Tehran was set on fire.

Residents in Yazd, Kermanshah, Hamedan, Ahvaz, Isfahan, Urmia, Zahedan, Fardis, Golshahr, and Mehrshahr districts of Karaj and a number of other places staged nightly protests chanting, “Death to the Dictator” and “Death to the Supreme Leader after many long years of crimes.”

Youths in Jekigur of Sistan and Baluchestan province blocked the roads by setting up a fire with whatever was at their disposal. In Ilam, they attacked the Vazir Abad police station with Molotov cocktails.

On Thursday, marking the 7th day of the martyrdom of Hamid-Reza Rouhi, a large crowd, including students, gathered in Beheshte Zahra cemetery, southern Tehran, to pay their respect, chanting “Death to the child-killer regime,” “Pledge to our fallen comrades, we remain steadfast to the end.”

The funeral processions of martyr Hossein Zarin Joui in Khorramabad and Fuad Mohammadi in Kamyaran were held with people chanting “Death to Khamenei.”

The employees of the Cruise Company in Tehran and the Machinery Company in Qazvin went on strike. The employees of the Cruise Company chanted, “Poverty line is 20 (million) tomans, our salary is 6 (million) tomans.” In Isfahan, farmers from the east and west of the city staged a protest rally demanding their entitlement to an adequate water supply.

On Thursday morning, November 24, the families of arrestees in the uprising converged in front of Tehran’s Evin prison and sought the whereabouts of their children and relatives. On Thursday morning, defiant youths set fire to a large banner depicting Ali Khamenei in Ardakan, Yazd. On Wednesday, November 23, the state-run website “Rah-e Dana” reported that a member of IRGC in Marivan, Ali Fattahi, was killed in the city’s Behzisti intersection.