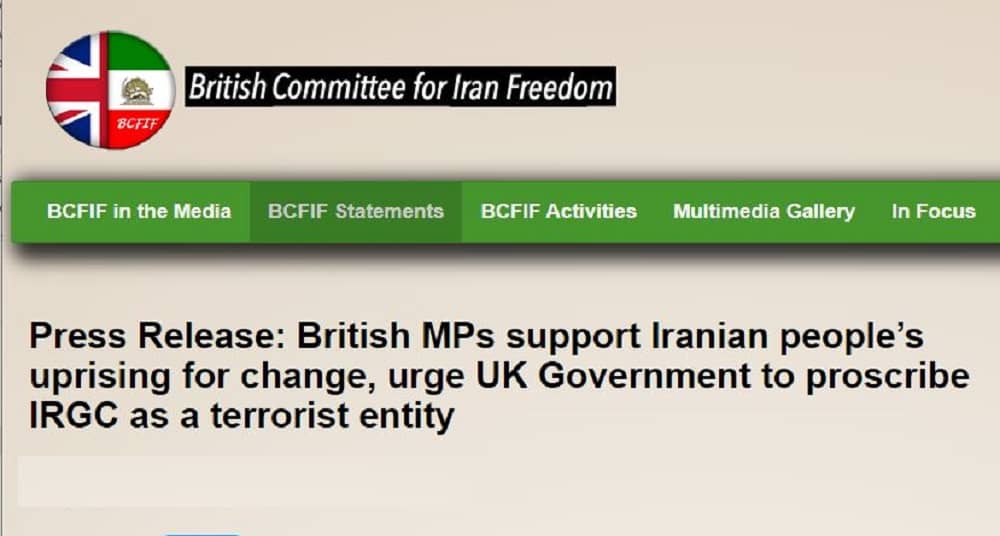 Following a conference in the United Kingdom’s parliament on November 24, the British Committee for Iran Freedom issued a press release. Today’s conference featured several prominent British lawmakers from both Houses of Common and Lords. The keynote speaker of Thursday’s event was Mrs. Maryam Rajavi, the president-elect of the National Council of Resistance of Iran (NCRI). 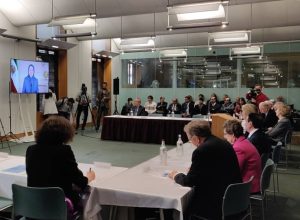 “The appropriate policy by the UK under these circumstances is to fulfill its promise to deliver accountability for the regime, the cross-party speakers agreed, calling on the UK Government to back Mrs. Rajavi’s call for a referral of the regime’s appalling human rights dossier and the violent repression of protests to the UN Security Council for an international investigation and prosecution of regime’s officials responsible for these heinous human rights violations,” the press release reads in part.

.@Anna_Firth: I welcome the fact that the UK government announced the second round of human rights sanctions against 24 Iranian officials last Monday. But I would like to see the immediate removal of Iran from the UNCSW. #IranRevoIution https://t.co/qy29qFHjIu

Cross-party MPs and Peers attended a virtual meeting with the opposition leader and the President-elect of the National Council of Resistance of Iran (NCRI), Mrs. Maryam Rajavi, in the UK Parliament on Thursday, 24 November, and discussed possible steps by the UK to support the popular uprising led by women in Iran.

They welcomed UK’s recent sanctions and diplomatic protests in response to the violent repression in Iran and commended the UK Government’s commitment to hold to account the regime in Tehran for its deadly crackdown on protests.

The conference held on the occasion of International Day for the Elimination of Violence against Women highlighted the violent suppression of women’s rights and state violence against women displayed by the tragic death of Mahsa Jina Amini in the custody of “morality police”, which sparked the ongoing uprising against the regime. It coincided with a special session of the UN Human Rights Council that passed a resolution calling for an independent international fact-finding investigation of the regime’s crimes against protesters.

The cross-party speakers stressed that the UK Government should proscribe the IRGC in its entirety.

They declared the strong, cross-party support in both Houses of the UK Parliament for the brave women of Iran who are leading the anti-regime protests and the resistance units to realise the Iranian people’s democratic aspirations.

They said the culture of impunity is emboldening the Iranian authorities to continue to oppress the people and women in Iran, which has led to the killing of over 600 protesters, including 60 children, and the arrest of more than 30,000.

The appropriate policy by the UK under these circumstances is to fulfill its promise to deliver accountability for the regime, the cross-party speakers agreed, calling on the UK Government to back Mrs. Rajavi’s call for a referral of the regime’s appalling human rights dossier and the violent repression of protests to the UN Security Council for an international investigation and prosecution of regime’s officials responsible for these heinous human rights violations.

Bob Blackman MP, Co-President of the International Committee of Parliamentarians for a Democratic Iran (ICPDI), alluded to serious threats by the regime recently against journalists as well as members of parliament and Iranian dissidents and activists living in the UK for supporting the Iranian popular uprising and said: “It is only right the FCDO works with the Home Office to heed our recommendations of proscribing the entire IRGC as a terrorist organisation. Such a decision is appropriate and reflects IRGC’s true nature. It also has widespread support in the parliament and among MPs and Peers.”

The keynote speaker of the conference, NCRI president-elect Mrs. Maryam Rajavi thanked the British Committee for Iran Freedom for the invitation and the cross-party members of Parliament for their support for the women and people of Iran.

She described the desire of the people of Iran as “rejecting the rule of religious tyranny; establishing a democratic republic and rejecting a return to the shah’s dictatorship; commitment to gender equality and rejection of forced veiling and all forms of misogyny, emphasising the separation of religion and state; defending the freedoms and equal rights of oppressed nationalities with autonomy within Iran’s borders.”

“This regime does not represent the Iranian people and has no legitimacy. It must be expelled from all international organisations”, she emphasised.

Speakers reiterated Mrs. Rajavi’s remarks regarding the Iranian people’s demands and seeking regime change and urged the UK Government to recognise this reality by backing the right of women and people of Iran to defend themselves against state repression and to establish a future government that truly represents the Iranian society and the people.

They also stressed that the UK should engage in talks and closer cooperation with those who strive for a free, democratic and secular republic in Iran, in particular, the NCRI and Mrs. Rajavi, because they have a social network and resistance units inside Iran and a 10-point platform for the future of the country, which offers a viable democratic alternative to the current regime based on and reflecting the Iranian people’s democratic aspirations.

Prof Lord Alton of Liverpool said: “As Madam Rajavi stressed, the reality is that the elimination of state violence in Iran requires accountability, and I support her call for a referral of the regime’s human rights dossier to the UN Security Council for the prosecution of regime’s leaders and officials responsible for decades of crimes against humanity. Our Government and the EU know exactly who these officials are because they just impose human rights sanctions against them. Britain is in the best position to secure this investigation and subsequent prosecution given our respected voice globally and our seats at both the UN Security Council and Human Rights Council.”

The Rt Hon Theresa Villiers MP, former Secretary of State for Environment and Northern Ireland reiterated that the UK Government should proscribe the IRGC and refer the human rights abuses committed by the mullahs in Iran to the UN Security Council as part of increased diplomatic pressure.

“We all here want to see Iran move towards a free and democratic future. We share the aspirations of those brave protesters. And I want to see that reflected in the robust approach from our UK government”, she said and added: “I think as part of that diplomatic pressure, we should see the shutdown of the political office of the Supreme Leader, the Islamic Centre in Maida Vale. I find it astonishing that this is allowed to continue and the fact that it even apparently received COVID assistance and furlough grants.”

Jim Shannon MP supported the call for international accountability through UN mechanisms and prosecution of regime officials and said: “Our strong statements, condemnations, and declaration of support is certainly a moral boost for the women and people of Iran.

“However, they will not end the regime’s repression but ending the culture of impunity and increasing the cost for regime’s leaders will go a long way.”