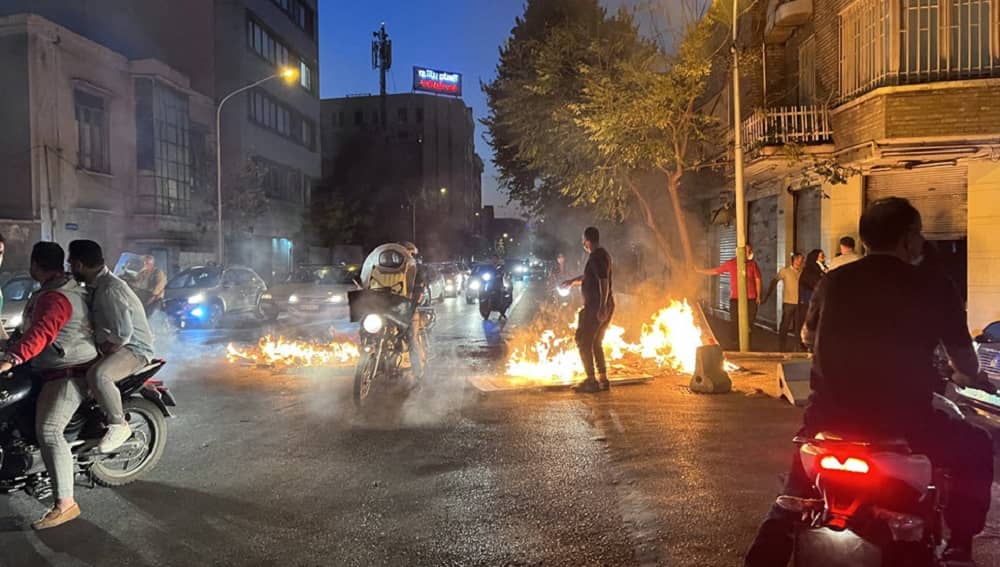 Protesters chanted, “All these years of crime, death to this velayat, (Khamenei),” “Death to the child-killing government,” “IRGC, Basijs, you are the same as ISIS,” “The crippled (referring to Ali Khamenei) is responsible for the mass-murders in Shahchergh (Shiraz),” “We don’t want a child-killing government, ” “For every fallen person, one thousand rises up,” “You are filthy, I am a noblewoman.” Women also held a nightly protest in Sattar Khan Ave. Anti-government slogans echoed from the buildings in Jannat Abad.

November 26 – Isfahan, central #Iran
More footage of locals continuing the nationwide protests against the regime on the 72nd night of the uprising.#IranRevolution2022#مرگ_بر_ستمگر_چه_شاه_باشه_چه_رهبر pic.twitter.com/qnjIhihIhK

In the Golshahr and Azimieh districts of Karaj, youths staged a fervent protest chanting, “Death to Khamenei.” The people of Isfahan staged a nightly rally on central Nazar Street in upper Chaharbagh while chanting, “You are filthy; I am a noblewoman”. In Mashhad, people converged and chanted, “All these years of crime, death to this velayat, (Khamenei).” In Jolfa (East Azerbaijan province), people took to the streets and protested during the night.

In Mashhad, the Qa’em Bridge telecommunication tower and a Basij base; in Puldokhtar, Kermanshah, the regime’s Islamic Propaganda Centre; in Bandar Abbas, a giant state-installed billboard; in Birjand (South Khorasan province), a large paramilitary Basij banner; in Arak, a government banner, in Aligudarz (Lorestan province), a statue of Khomeini in the so-called Khomeini Square were set on fire.

On Saturday, November 26, people in Mashhad paid their homage to 16-year-old martyr Abolfazl Adinehzadeh, killed by suppressive forces near the Ferdowsi University of Mashhad on October 8. Locals in Fouman gathered at Mehran Basir Tawana’s graveyard on the third day of his martyrdom. They chanted, “This is the perished loved one, dedicated to our country”. The people of Shiraz held a ceremony on the third anniversary of the martyrdom of Amir Alwandi Mehr, who was killed by the State Security Force (SSF) in the November 2019 uprising. They chanted, “This year is the year of sacrifice; Seyed Ali (Khamenei) will be overthrown.” In Abdanan, Ilam, the families of arrestees gathered outside the prosecutor’s office and demanded the release of their loved ones.

On Friday, November 25, some 140 ophthalmologists in Iran warned in a letter to the head of the medical institution that many people who have gone to medical centers have lost sight of one or two eyes due to being hit by pellets and paintballs.

On the morning of November 26, a state-run newspaper Setareh Sobh wrote an article concerning protests in universities, stating that the universities that had been dead politically suddenly became active politically and started protests because of the uprising, whereas “many students entered the universities with (government allocated) quotas, and the paramilitary Basij students are also present in the universities; nevertheless, these two factors failed to prevent students’ protests.”