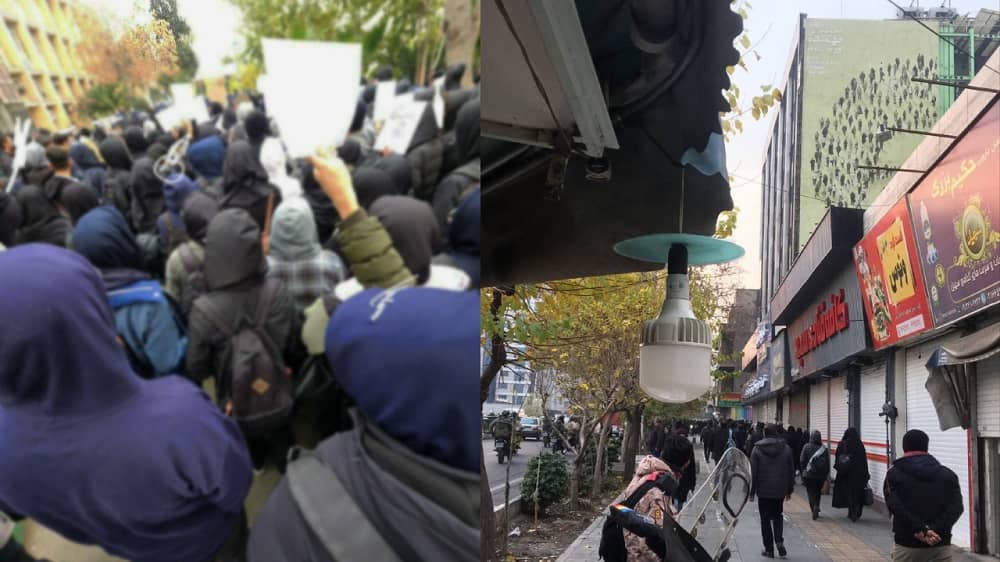 On Thursday, December 8, the 84th day of the uprising, people in Sanandaj paid their homage to Sarina Sa’edi on her 40th day of martyrdom. The ceremony was held in Behesht Mohammadi Cemetery despite extensive security measures and the heavy presence of the security forces. The mourners chanted: “This year is the year of sacrifice; Seyed Ali (Khamenei) will be overthrown,” “Poverty, corruption, and high prices; We shall carry on until the overthrow of the regime,” “Death to the dictator (referring to Ali Khamenei)”. Sarina Sa’edi, a 15-year-old girl from Sanandaj, suffered a cerebral hemorrhage on October 26 in the Naysar neighborhood of Sanandaj due to multiple and severe baton blows. She died on October 27 in Towhid Hospital of Sanandaj.

At 3 a.m. Thursday, December 8, the funeral ceremony of Hooman Abdullahi, a 21-year-old martyr of the uprising, was held in Sanandaj. He was shot dead due to the direct shooting of suppressive forces. The regime’s agents kidnapped his body and compelled his family to bury him at night.

In Arak, in fear of holding the 40th day ceremony of Mehrshad Shahidi, the regime cordoned the city’s cemetery off this morning and blocked the street leading to it with concrete barriers. The city’s local TV announced yesterday that the cemetery was closed. The security force elite unit was stationed outside the house and on the rooftops around Mehrshad’s house and prevented people from entering the area. They did not even allow the martyr’s family to leave the house and hold the ceremony. In some areas, gunshots could be heard. However, the brave women of Arak gathered in the street despite these repressive measures. They called the people to protest by chanting, “Proud Compatriots express your support”. Locals drove towards the cemetery with continuous honking.

In Ramsar, people paid their respect to Ma’edeh Javanfar, on the 40th day of her martyrdom. She was a 28-year-old nurse that was martyred by the regime’s criminal agents on October 25 in the city of Rasht.

In Dezful, criminal agents of the elite unit were stationed in the city to prevent people from paying their homage to Mohammad Gha’emifar. He was a 17-year-old teenager injured by security forces on October 22 and died 15 days later. Despite security measures, however, people took part in the procession by chanting, “This is the perished flower dedicated to our motherland”.

On Thursday morning, storeowners in Sanandaj in Kurdistan Province took to the streets protesting decisions made by authorities to shutter stores of those who participated in the recent three-day strikes in solidarity with the ongoing Iranian revolution. They chanted, “Death to the dictator (referring to Ali Khamenei)” and clashed with the regime’s security forces, who shot at the shopkeepers and wounded some. Sanandaj shopkeepers went on strike to support sealed shop owners and refused to open their shops. In Najaf Abad, the bazaar merchants organized a protest against sealing their shops. Shopkeepers in Ravansar, whose shops had been sealed, staged a protest rally in front of the city’s governor.

Students at the Azad University of Qom disrupted the speech of Ghazizadeh, one of Ebrahim Raisi’s deputies, who was visiting the university. Students chanted, “This year is the year of sacrifice; Seyed Ali (Khamenei) will be overthrown,” and “We don’t want a murderous guest; we don’t want a corrupt system”. Defiant youths set fire to an IRGC telecommunication tower in Sarab. In Kut Abdullah, a seminary of the clerical regime was set on fire. On Wednesday, youths in Arak attacked with Molotov cocktails an infamous paramilitary Basij base called Sayyad.

Students of Rassam Karaj University held a protest rally and chanted, “We have neither bread nor home; the hijab has become a scapegoat,” and “High prices and inflation; people are being looted”.

December 8 – Sanandaj, western #Iran
Locals are on strike and continuing the nationwide protests against the regime on the 84th day of the uprising.#IranRevolution2022#اعتصابات_سراسری pic.twitter.com/MvWmZNUheq

December 8 – Arak, central #Iran
Regime security units dispatched to the local cemetery during today's ceremony marking the 40th day of the murder of Mehrshad Shahdi by the security forces are seen attacking the locals.#IranRevolution#مهرشاد_شهیدیpic.twitter.com/6OblC6LxMk